Kristin Bauer is a busy girl. Actress, artist, animal lover and newly wed to Abri van Straten, singer of the South-African band The Lemmings. She used her breaks on set to fill out The Vault’s questionnaire. 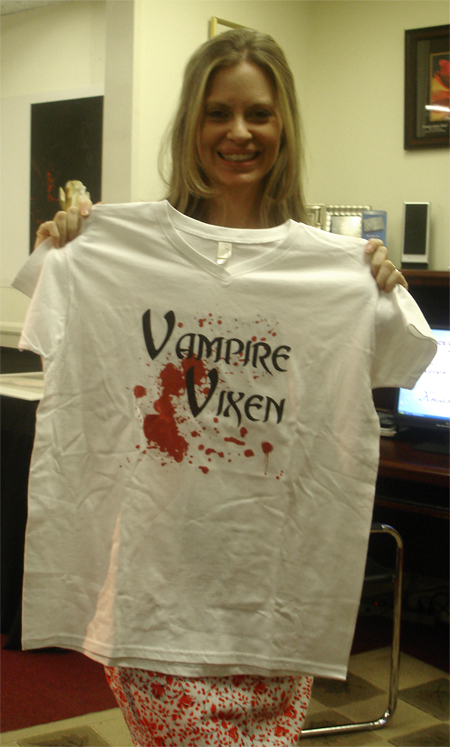 First of all congratulations on your marriage.

No more bad dates for you. Have you had any dating disasters?

Oh sister…ah…yeah! I had some nice dates too, but there were also some real goofballs. I won’t miss dating.

Have you ever been on a blind date? How did that work out?

How was your wedding day? Was it the perfect day?

It could not have been more perfect. It was easy, fun, stress free and beautiful. We were very lucky.

Where did you spend your honeymoon?

In Hayward, Wisconsin at Ross’ Teal Lake Lodge in a cabin on a lake…with my entire family! It was great.

I would have liked to see more Pam in Season 2, but what we did see was hilarious. Highlighting Eric’s hair, her new pumps all dirty and having to deal with smelly teacup humans. Pam is quite a character. How would you describe her, what makes her tick?

Pam’s outfits are already legendary. From tracksuit to red cat suit. Audrey Fisher is doing a great job. What can we learn about Pam looking at her clothes?

What was that ad campaign? Something about the cloths making the man? Well, there is no Pam without her cloths and Audrey is that vision. I can’t thank her enough!

In your private life how much of a fashion girl are you? What kind of clothes do you like to wear? Do you enjoy dressing up for special occasions?

I do! For a party here and there, but mainly I like comfort. But I’m trying to wear cuter stuff at home now that I have a husband. I mean, how many days can he look at sweats and slippers? Hopefully about 50 times 365.

How long did it take you to find the perfect wedding dress?

About 2 minutes. I tore photo out of a magazine of an Alberta Ferrety, asked Audrey’s opinion, she called them, they sent it, and I loved it. My whole wedding went like that, easy.

Would you be as upset as Pam was about ruining a pair of pumps?

My favorite brand new pumps? Just about, not quite homicidal, but just short.

Eric mentions that Pam has several pet humans. We haven’t seen any of them yet. What is your idea about these pets, what kind of people are they and does Pam have any sentiments for them?

She’s like my dog I bet. He has his new favorite stuffed toy and he cherishes it, chews on it, and carries it around, sleeps with it. He has many toys but one will be special for a time until one day when he rips it apart for no apparent reason. He may feel remorse but I can’t see it. Then he’s on to a new one. He lives in the moment.

You did the commentary tracks for the Blu-Ray of Season 2. What can we expect?

That was so much fun! I got to discover Pam’s viewpoints on Eric, Bill, the queen, cookie, Jessica…it was very enlightening. How Pam was made, and who she is beyond the pumps.

We don’t know much about Pam’s background, will she reveal some things about herself in the comments?
Oh yes!

What would you like to see happen to Pam in Season 3?

I really have no idea but trust it’ll be good.

Would you like her to be romantically involved with somebody? With whom? Man or woman?

There’s been talk about her open mind on that topic. Won’t it be fun to find out!

If you were to be turn into a vampire tomorrow, what would your last meal be?

Are you a good cook?  Is there something that you really don’t like and wouldn’t eat for love or money?

I am for the first time inspired to cook because of Abri. I bought a cookbook and am trying. Abri is a great cook.
You could not pay me to eat veal. I’ve seen the baby cows living in the boxes in their own crap, unable to turn around or stand up. It was intensely sad and cruel. All for more tender meat than if they got to walk around. They live that way their whole lives for 20 minutes of another’s pleasure. Astounding.

What do you listen to on your Ipod? Besides The Lemmings….
ha, ha. you’re on to me! I like the music in Abri’s genre;  Sting,  Seal, James Taylor, Annie Lennox.

You look quite different from Pam, a much softer look. Do fans recognize you on the street and talk to you? What do they say?

Sometimes but I think I look different enough to pass by. One day when I was in more makeup, a lady at Starbucks said, “You look just like that character on True Blood”.  I thought.  Should I, and then said, “well, there’s a good reason for that…”

Are you aware of how popular True Blood has become?

I am beginning to get it. It is quite something!

When did you start to have an idea about the popularity?

After our wedding, we went up to the north woods of Wisconsin the day after to a no internet, cell phone free zone. When we came back and saw our wedding news and photos all over the internet I could not believe it.

Do you ever check out the messages boards to see what people write about the show and about you?

Once.  My husband does sometimes,  my nieces, too. They show me the good stuff.

There is a Kristin Bauer fan page on Facebook. Is that you?

No, but my niece found it.  She is doing a great job!  I saw all kinds of photos and clips of me I’d never seen!

Not yet.  Maybe I should.

Has your life/career changed in any way because of True Blood?

I get invited to more parties.

I read on EOnline that you predict children for Anna and Stephen and then you posted a comment on that article in an attempt to set it straight. What was that all about?

Oh boy. Yeah. I have no idea of their plans! She asked if I’d be surprised and I said no, why would I be? They are great together…and then all of a sudden I was Nostradamus. I was so embarrassed!

You were originally cast for ‘Hung’ but in the end it was Anne Heche who got the part. Do these things often happen in the business?

I was told it would happen to me some day, and hoped not. But yeah, it does.

How do you deal with it when you are rejected for a role?

You hope the show fails. That is the honest truth. Like when a guy jilts ya. You hope he gets something contagious but not life threatening. And then in time you are able to wish them well which is where I am now.

What are you favorite TV Shows?

In which TV Shows would you like to make a guest appearance?

I would have loved to be on deadwood.

You completed the movie “Subject: I Love You”. What is the movie about and what part to do play in it?
Do you know when will the movie be released?

Should be a fun teen love story. I play an FBI agent. A producer told me we’ll be seeing it soon.

Better and better. HP did me wrong and I had to cheat on them with Mac and man I’ll never go back.

You also completed “House Rules” a television movie directed by Michael Minahan, who of course directed several True Blood episodes. What is the movie about and what part to do play in it?
Do you know when the movie will be released?

I’m also not sure about that, but it was wonderful to work with Dan. What a lovely man! I play a new congress woman ala Sarah plain. Great fun!

You are currently filming “Three Rivers”.  What part will you be playing?

A sobbing mom with a dying daughter. Very, very unlike Pam, “humans are messy.” sounds like Pam doesn’t it?