A magical tour on the True Blood set

A magical tour on the True Blood set by Jodi

Magic happens in a little corner of West Hollywood within innocuous beige buildings. The Vault was privileged to visit some of the key indoor sets where HBO’s True Blood is filmed.

This magic begins with its people. No filming was taking place this day. Ryan Kwanten, Amy Camp and Michael McMillian were filming on location. We were guided through the tour by Kelley (HBO Publicist) and Khadija (Production Secretary). Kind, thoughtful and laid-back, these two ladies were as interested to hear about the audience reaction to the show as we were interested to know more about True Blood. Part of the delight was hearing these ladies speak with such sincerity and reverence about cast, crew and creator. 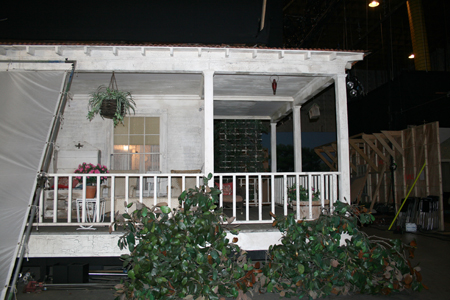 Within a building that is large enough to house airplanes sits the indoor set of Merlotte’s. Even close-up, it is convincing as a bar and grille. You have to fight the impulse to sit down and wait for Sookie to take your order. The booths are spacious, the plastic menu covers have scratches and fingerprints, the baseboards and corners have grime. It looks like it’s overdue for a thorough cleaning and a few coats of paint. All the wood surfaces have the patina of age and use. The floors are scuffed, scarred and pitted with the look of constant abuse. The pool table area looks much smaller in person than on TV; the table’s green felt shows up in bright contrast to the muted colors around it.

Outside the windows throughout Merlotte’s you can see parked cars (real autos, not paintings) and lush vegetation. The back of the bar is dense with liquor bottles and photographs layered together in a collage of memories. There is a photo of Alan Ball with Charlaine Harris, too. It is utterly convincing. You would not doubt for a minute that this bar is an active, continuously used one. Evidence of business is everywhere – bits of paper, business and liquor licenses, phone numbers scribbled down on whatever was at hand, fingerprints pattern nearly everything. There’s a small Confederate flag reminding you what part of the country you’re in. At one end of the bar, mounted on the wall, is a stuffed squirrel adorned with brightly colored Mardi Gras beads. Beyond that is the hallway and the cook’s window where the recently prepared food is given to the servers. 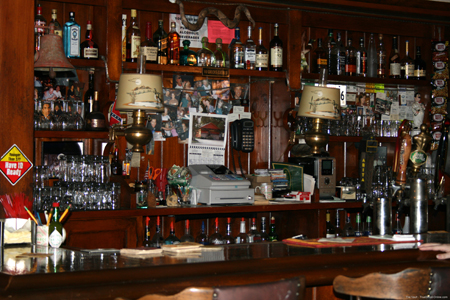 The hallway has platters with crumbs on them, silverware, straws and other items. On a side wall, there is a erasable white board with the waitresses’ work schedules written on it in a graph configuration. (Sookie works Monday, Tuesday, Thursday and Saturday. *Days please)

Further down the hallway is Sam’s office. It, too, looked much smaller in person than on camera. His roll-top desk is large, though; stuffed with papers and needed items. His adding machine, like all the electronic devices in Merlotte’s, is an older model. There are no small, sleek, ultra modern devices there. No visible ipod docks or cordless phones. More like the electronics of the nineties – or earlier. 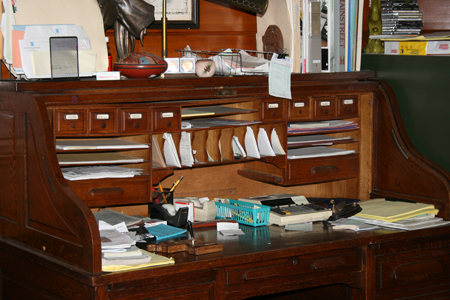 It’s hard to leave Merlotte’s. It’s familiar. It’s interesting. And there’s so much to see. But, we step outside the soundstage into daylight and an immaculate little street. In fact, the entire place is immaculate. No trash, no graffiti, no flyers … and no loud sounds. The crew outside the stage (moving small trees and shrubs around) look up, smile and say “hi” softly, but there are no radios playing, no audible conversations, nothing. Just clean, quiet and calm.

A glance down one end of the street brings the offices into view. Like the rest of the buildings used for filming, the production offices look like they were built in the 1940s or 50s; immaculately maintained – but never upgraded. Stairs leading to the second floor are very worn. Inside are plain beige rooms housing stacks of electronic equipment. There are trendy looking young men with a few days’ beard growth, dressed in denim, staring into monitors. There are no pictures on the walls. No family snapshots pinned to bulletin boards. No flowers. No adornments or personalized trinkets. These are temporary offices. No one stays here. The hallways are the same – plain beige, no pictures. The floors are cleaned and polished but well-worn. The are a few pages of copy paper taped at strategic points. “True Blood Costumes” with an arrow pointing in the appropriate direction. Temporary, make-shift signs for navigating to the right place. 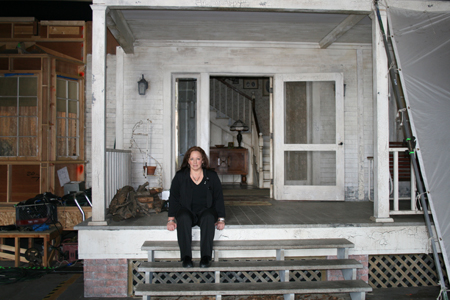 The Vault's reporter Jodi on the steps of Gran's house

Turning back to the soundstages, close at hand is the stage for Gran’s house. Before entering, we notice the large light above the huge stage doors. A sign tells us not to enter when the red light is on; it indicates that filming is in process. Inside is the white porch so familiar to fans. It’s attached to a partial, roofless house. The doorway where Sookie first invited Bill into the house stands open for us.

It is striking how familiar it all is and how strange. Some parts of the house that looked huge on screen are really quite small. Some areas are rather large. Gran’s living room is full of pictures. Pictures on the mantle, pictures on the walls, pictures on little tables – mostly of Jason and Sookie at various ages. There is a piano on one wall (that I didn’t remember seeing before); the familiar sofa and chairs. There are little figurines placed around, as if Gran was a collector – or as if they had a special significance to her. Of course, no Grandmother’s country home would be complete without a few doilies scattered around. 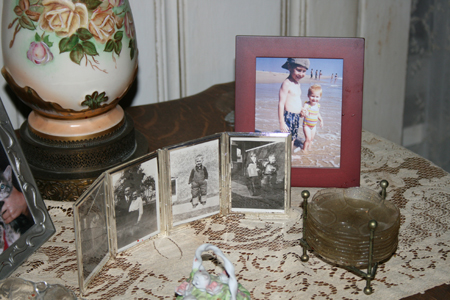 The white kitchen is relatively large. There’s a built-in china cabinet and lots of shelves. Every surface looks jammed with appliances, china, cookbooks, serving pieces, memorabilia. Again, everything looks like it’s been serving the family for a long time. There are a few incongruous exceptions; compromises to modern life – such as the microwave and cordless phone.

It’s clear that Gran was used to “making do” and “using what’s on hand” … for a home in the modern era, there is precious little plastic in her kitchen. She saved glass jars and bottles; she hung herbs and flowers upside down to dry in the tiny room near the back door near where she was slain. Crowded together across the room are neat, tightly capped jars of home-preserved foods. A couple of ceramic pots (slow cookers?) with a vegetable pattern look more contemporary than what surrounds them. And one gets the feeling that Gran no longer had a full set of anything – plates or mugs or glasses. The china and ceramics that are scattered throughout the kitchen are all of another era. There is a smattering of Victorian style but mostly the look of a country kitchen in the mid-twentieth century. For all the pride Gran had in her home, the cabinets have lost some of their paint and look a bit dirty. 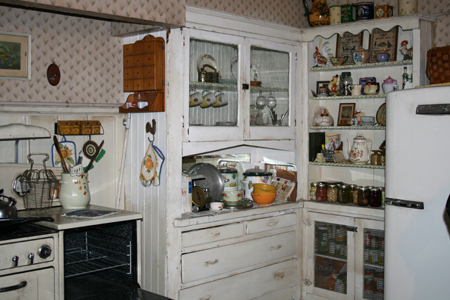 There is a plain wooden cross on her living room wall and one on her bedroom wall. The shoulder strap of a white purse hangs over the foot post of Gran’s dark wood, carved bed. The wallpaper is floral patterned and all the cabinets are painted to look as if they once were white but are now scrapped and faded.

The staircase wall is full of pictures of Sookie, Jason and unidentified loved ones from earlier eras. And though the staircase doesn’t really lead to a useful second floor, as long as you don’t look at the ceiling or venture all the way upstairs, you would be utterly convinced that this is Gran’s home. The books are real and the titles seem at home there. The photos are really of Sookie and Jason. The sets are not “Hollywood-fake”, but the product of an artist that has created an alternate reality. Production Designer Ms. Suzuki Ingerslev and her team deserve our admiration. 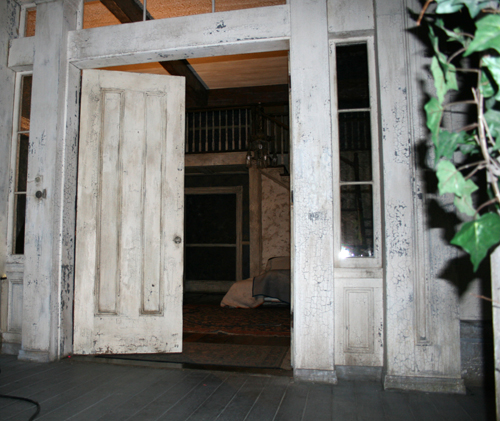 Lastly … and reverently … we approach Bill’s house. The front porch of the inside set looks smaller than on TV and taller somehow. There are the familiar side-light windows on either side of the front doors and the equally familiar transom window above them. Inside, the foyer is a white/gray combination. The staircase runs up to the right of the foyer near the living room entrance. The staircase banister and steps are a dark wood but the rest of the stair is painted whitish. The stairs lead to a landing and to a few “half-room” storage areas. Bill’s exquisite bathroom, where he and Sookie bathed and where Eric lounged in wait for Bill, is somewhere else. Towards the left side of the foyer is where Bill’s hidey-hole is supposed to be – a part of wood paneling that is a secret door. But it is not really there. It must be something created especially for the needed scenes. 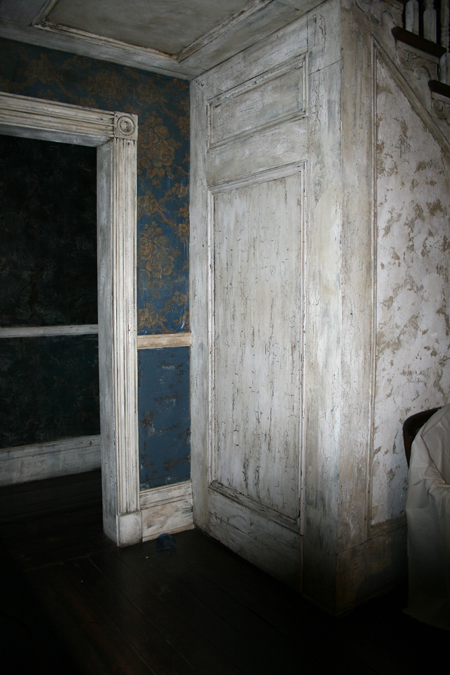 The paint, inside and out, is blistered. As opposed to Gran’s house where the inside paint looked worn – rubbed off. Bill’s house doesn’t look worn as much as neglected over a long period of time. It is brilliant how the set designer, Suzuki Ingerslev, has created a very obvious distinction between the effects of use and time. Like the distinction between Bill’s old Southern accent versus Jason’s modern one, Bill’s house is aged in a different way. The colors and style within represent a much older era; more elegant than the Stackhouse home. The living room wallpaper is peeling off the walls in large strips; it is dark teal with a light brown/gold pattern. The paint is mottled and pieces of plaster have eroded away. The floors are a dark wood as is the fireplace and picture frames. The sparse furniture is covered in sheets so no unintended marring or soil will change the continuity when filming resumes. In fact, there is very little in Bill’s house.

For a fan to visit some of the sets of True Blood is truly impactful. It deepens one’s appreciation of the variety of talent that contributes to the show and confirms the dedication each artist or technician brings to their work. To stand where the actors must have stood during scenes that are unforgettable to us all is thrilling. Once again, thanks to Kelley and Khadija …. thanks to HBO for a memorable afternoon. The Vault is privileged to be allowed this glimpse behind the scenes of the show we adore – True Blood.