True Blood stars Alexander Skarsgård and Kristin Bauer van Straten donate autographed memorabilia in the first ever Greenpeace auction to help raise funds to build a new Rainbow Warrior. Their signed scripts are among Picassos, visits with famous athletes and lunches with famous actresses. Even a concert in Paris! The auctions run for an entire month! 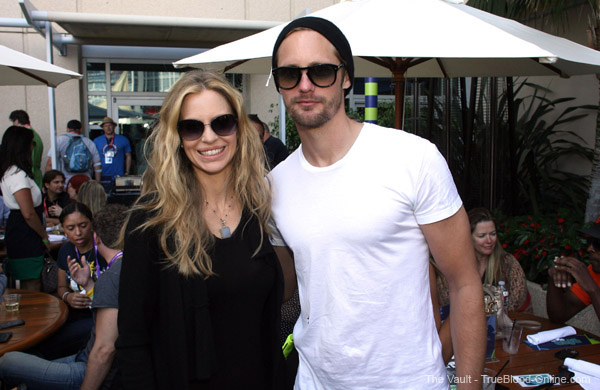 New York/Amsterdam, August 25, 2011. – Celebrities from around the world are taking their commitment to save the planet to the next level to raise money for Greenpeace’s new flagship Rainbow Warrior. From backstage passes to private lunches you’ll see celebrities giving it up to the highest bidder in an attempt to raise money to pay for the world’s leading environmental organisation’s new environmentally friendly ship.
Along with charitybuzz, the charity auction house, Greenpeace announced auctions of celebrity items to be held through September.

The auction opens today and will run through to September 21st, at http://www.charitybuzz.com/greenpeace.

The Rainbow Warrior is Greenpeace’s first purpose-built vessel, and will play a key role in the fight to stop environmental destruction and promote sustainable solutions, allowing the organisation to continue bearing witness and taking action to prevent environmental crimes around the world. The ship will be ready to sail in Autumn 2011, to mark Greenpeace’s 40th anniversary.

Celebrities are helping the cause by offering up their dinner reservations and giving VIP access to concert backdoors, all to raise money in the charitybuzz online auction. Highlights include:

“Participating in the building of the new Rainbow Warrior is a chance for all of us to be part of history as we decide what kind of future we want to hand to our children. I am proud to stand with Greenpeace and be a part of the crew that helps build the new Rainbow Warrior”, said Lucy Lawless, on behalf of all celebrities involved with this auction.

“Charitybuzz is thrilled to be partnering with Greenpeace International for their first online auction to fund the new Rainbow Warrior and its vital work around the globe,” said Coppy Holzman, charitybuzz CEO and co-founder. “We encourage supporters around the world to log on and bid to give on fabulous auction items, including Picasso pieces, VIP celebrity meet and greets, and so much more.”

SkarsgårdNews.com donated, with Alexander Skarsgård’s approval, his very own season 3 True Blood finale script that he’d given the site. Now it’s among Picassos, lunches with celebrities, and other signed merchandise that’s available for auction to help Greenpeace build Rainbow Warrior III! Check out all of the auctions, or Alex’s script auction, also check out Kristin Bauer’s script auction!