It might not have been the best idea, given that he was attending a promotional event for FC Barcelona, but Swedish actor Alexander Skarsgard didn’t show up wearing the famed purply-blue and red uniform of the Catalan champions. 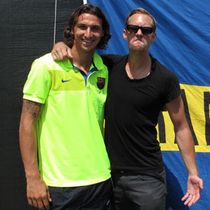 Skarsgard was wearing green and white, instead – a Hammarby jersey. As he explained this, there was a chorus of boos from the spectators in the Nike Ricardo Montalban theater in Los Angeles. The audience was all about Barcelona, and they had little tolerance for any divided loyalty.

Skarsgard tried to explain. He mentioned that as a Swede, he was excited to be there to support Zlatan Ibrahimovic, the Swedish player recently signed by FC Barcelona.

“Soccer in Sweden is like a religion,” Skarsgard said, “Growing up in Sweden, in the south of Stockholm, we supported Hammarby.”

“They’re terrible,” Skarsgard continued. “We don’t really have any good players. We don’t have any money. We almost always lose. It’s not a lot of fun.”

The crowd hesitated, unsure what to make of such a withering description of a club by an alleged fan.

“You don’t have to feel threatened by us,” continued Skarsgard, “We won’t ever defeat or take anything from Barcelona. The Swedish league is weak. Our good players leave. The good players go to clubs like Barcelona.”

A few cheers went up at this, but most people were taken aback, or perhaps feeling sympathetic for Skarsgard.

When the host of the celebrity segment mentioned in a commercially pandering segue that Hammarby was sponsored by Nike, and could perhaps improve, seeing how Nike sponsored a winner like Barcelona, Skarsgard shook his head vehemently.

“Nike paid like three dollars to sponsor this,” he said, one hand on his Hammarby jersey. “We’re not even the best team in Stockholm.”

At this point, most in the room decided Skarsgard was joking, and chose to laugh along.

Skarsgard grinned and said he might not even be able to comprehend Barcelona’s skill on the field. “I’m used to watching slow – it’s probably going to be too fast for me.”

One thing Skarsgard never said, however, was that he would give up being a Hammarby fan.

Loving a winner is easy, and Barcelona has had droves of fans following their every move even before they conquered the stunning treble of wins this past season.

Really, Barcelona doesn’t have to win Skarsgard over – the club doesn’t really need new fans. They have plenty of them already and collect more with every victory.

The glamor of the sport lies in clubs like Barcelona, who engrave their names on the big events, but the heart and soul of the game lies in clubs like Hammarby and the loyal fans that support these smaller organizations, far from the red carpets and the glittery reflections from multiple trophies.

Soccer would not be played all around the world if people just turned on their televisions to watch the big clubs play. The sport’s growth and longevity has often rested on the tribal aspects of a club representing a community. Those communities also serve as the cradle for developing players.