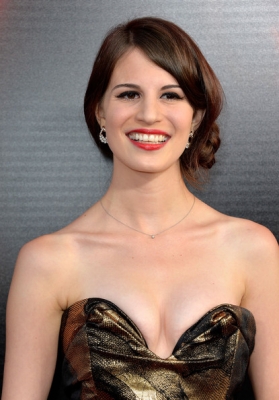 The Daily Quirk recently had the opportunity to chat with new True Blood cast member Amelia Rose Blaire. Amelia will be playing Willa Burrell, the daughter of Louisiana Governor Truman Burrell (played by Arliss Howard). The casting call for the part said that she has long clashed with her father over vampire rights. While her position is against her fathers plans she is powerless to stop him from his agenda

Read part of this interview with Amelia that pertains to True Blood:

The Daily Quirk: When I saw the latest preview for True Blood, I recognized you right away from my favorite episode of Touch where you had that wonderful southern accent. That and your latest role in the sixth season of True Blood made me curious, is the accent real?
ARB: Oh, cool! No, the accent is not real but it’s definitely one of my favorites.

TDQ: Speaking of True Blood, were you a fan of the show before the role or was the world of Bon Temps fairly new to you?
ARB: I’ve been a fan of the show since the beginning. When I went to my first table read, I had the goofiest smile plastered on the face. It was very surreal.

TDQ: You play Willa, the daughter of Louisiana Governor Truman Burrell (Arliss Howard) who has a very different view of how vampires should be treated than her father. What attracted you to the role of Willa?
ARB: When I first auditioned, I really didn’t know much about Willa. It was all very hush-hush. But once I got cast and started to get to know her, I was very attracted to what was boiling beneath the surface. To me, Willa is motivated by love and because of that she’s very conflicted.

TDQ: How has your experience been working on True Blood so far?
ARB: Awesome!! It has been unlike anything I’ve every experienced. Everyday on set, I learn something new.

TDQ: From the previews that have been released, we see your character is going to have some interesting interaction with vampire Eric Northman (Alexander Skarsgaard). Can you tell us a little bit about what it’s been like working with him?
ARB: Eric has always been one of my favorite characters, so honestly, it was a little intimidating at first. I’ve learned a lot from watching him work.

TDQ: If you had to sum up the new season of True Blood in five words or less, what would they be?
ARB: Revamped!

Read more of this interview with Amelia by going to: thedailyquirk.com