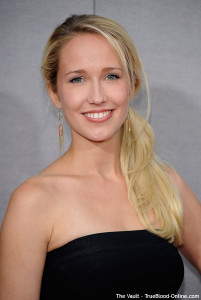 True Blood’s Anna Camp talks in an interview with The Insider about her various TV roles. Below is the portion of that interview devoted to True Blood and her character of Sarah Newlin.

Insider:What was the vibe like on the various TV shows you’ve worked on?
Anna: Well, True Blood is a crazy show but everybody is funny and kooky, so when you throw them on a set, crazy things happen — which I totally think you see on-screen.

Insider: For me, True Blood is the first time I remember seeing you on-screen — did you notice a collective consciousness shift with that role?
Anna: Oh my god, totally. It was the role that put me out there in a much bigger way. I had been doing theater in New York since I graduated. It was my first big job on a popular show. I thank Alan Ball every day for casting me. It was a turning point for me in my career. And I loved that character so much. I actually miss her a lot.

Insider: Well … that was my next question! Steve Newlin came back at the end of last season, might Sarah join him?
Anna: She might! There might be some Sarah Newlin in season five! You’ll just have to wait and see …

Insider: Well, since we didn’t leave her in the best place, where do you think she is today?
Anna: I think Steve’s left her and she is not happy about it. I think she’s confused and lost and spiteful and wants to get revenge on everyone [laughs].

Insider: Is she a vampire?
Anna: I don’t think so. I think she’s telling the world her story and wants revenge on Jason, her husband and is out for blood. That’s what I hope, at least.

Read this entire interview by going to: theinsider.com