Anna Paquin and Stephen Moyer almost on Sons of Anarchy 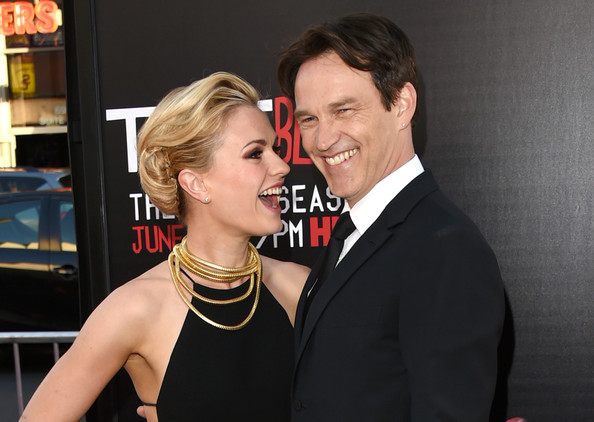 Anna Paquin and Stephen Moyer are huge fans of Sons of Anarchy (SOA) and that’s one of the reasons why Stephen Moyer agreed to star in the upcoming The Bastard Executioner series which is written and executive produced by Kurt Sutter, the creator of SOA. Just like for True Blood, Anna and Stephen seem to make there acting role decisions based mainly on the writing. Stephen has told the press many times that he took the job as Bill Compton because of the script written by creator Alan Ball. However, what we didn’t know until now was that because he and Anna love Kurt Sutter’s show so much they nearly made a guest appearance on SOA playing Charming’s most unrealistically well-groomed pimp and whore.

Stephen is quoted as saying:

“I was going to play a pimp and she was going to play a whore,” Moyer told EW exclusively. “We were trying to make it work. We were dead into it. The thing was, we agreed to have some time off after the end of True Blood, and we had already arranged it. Anna paid for the flights to New Zealand, and it happened that these bits and pieces were shooting while we were in New Zealand, and she hadn’t seen her family. We hadn’t been down there for ages. We just said we can’t do it, but we were obsessed with Sons, and it was date night tele for us in that macabre and weird, strange way that Sons of Anarchy became.”