True Blood’s Anna Paquin was recently interviewed by the British magazine ‘Stylist’.  The interviewer starts out the interview with a very good and in depth analysis of True Blood and we hope you’ll go there and read it, but we thought that our readers would be most interested in the questions asked of Anna so below are some of those questions. Anna talks candidly about True Blood and it’s fans, how she was brought up in New Zealand and about stardom. She also discusses her home in London and loving the great Indian food restaurants that can be found there. 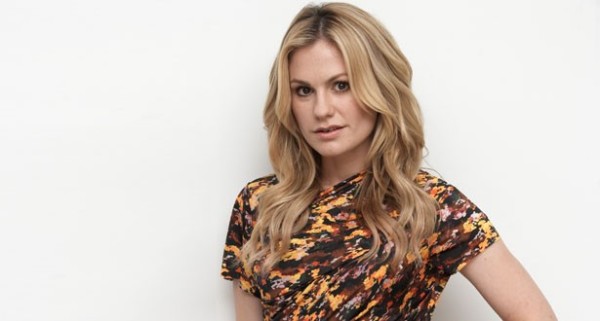 You’ve just celebrated your one-year anniversary, True Blood has been commissioned for a fifth series, and you have four films coming out. Is this the best time of your life?

This is definitely a really amazing time in my life, personally and professionally. A lot of things are coming together in a way that is just amazing and I feel incredibly lucky. We all know it’s not always going to be brilliant. There’s always the harder times. But this is one of those really, really good moments.

Do you ever find it difficult; being both married to Stephen and romantically involved with him on screen?

Not at all. We have a life outside the show. Plus, I get the opportunity to see my husband all the time as opposed to being stuck in a random country making a movie and not seeing him for five months.

Nonetheless, it must be refreshing to have a new love interest in the character of Eric [Swedish actor Alexander Skarsgård] in the fourth series?

Of course. It would be boring if all the characters were happily involved with the same person for season after season. There’s got to be conflict, there’s got to be some downs, some new people, so this season it’s the tall Swede. He’s massive – 6ft 4ins.

Well, in the books, there are very detailed encounters in a shower. Our boss has confirmed that there is indeed a scene in a shower with Sookie and Eric, the specifics are yet to be divulged. It could be anything!

True Blood has some pretty intense fans. How do you cope with them?

I started acting young, so I had a head start in dealing with the ‘work thing’. It didn’t used to be as crazy as it is now, but I don’t totally remember what it was like before. Being recognised happened much less often when I was younger, but it still happened. I don’t really notice it anymore to be honest. When I am out with friends, they will get kind of protective, and be like, “Do you want to move, these people are staring?” I’m like, “Oh no, we’re fine.”

Even if fans are in your face, taking pictures on their phones?

Hmm, that’s an odd one to me. I like to think I’m someone who has good manners, and that’s not something I consider to be polite. If you like somebody’s work, and you would like to take a picture with them, why don’t you ask?

I’ve only ever said no once or twice in my life. Once was when I was crying. I was like, “God, I don’t understand this at all. I’m not an unpleasant person or stuck up but I’m kind of weeping into my cell phone right now, is there any chance maybe you can give me a pass on that one?” You know, it is what it is. I’m not asking for a pity party, but I would never go up to somebody who was crying and say anything other than, “Can I give you a Kleenex?” But that’s just how I was brought up.

You were brought up in New Zealand. Has that helped keep you grounded?

Growing up in New Zealand, you’re about the things you have. I think that aspect of my upbringing has been helpful. So when people are really gushy about stuff, I kind of just want to laugh. I’m not someone who inherently believes someone when they pay me a compliment. I’m always sort of like, “Really?” A lot of the times, I can tell you’ve never seen my work, and you don’t know me, so you don’t know if you like me. It’s like you are kissing my ass because you think you should. I can be polite about it, but it doesn’t really make my heart go pitter patter.

Stephen is from the UK and you also have a house in London. It sounds like you’re becoming an honorary Brit?

I love that you can’t throw a stone without hitting an amazing Indian restaurant in London. That’s kind of the first thing we do when we go back to London, eat really good curry. Now I really want Indian food. Our house is right near Hampstead Heath, and when it’s sunny in London, there’s just nothing quite as beautiful. I also love any city that has a good public transport system, because then you feel like you can immediately get around and go places and have adventures on your own.

To read this entire interview, go to: stylist.co.uk