Second installment of the adventures of Shadaliza at the True Blood convention Bitten in Northampton, UK, August 6-8, 2010.

Check out the Photo Gallery for more photos from Bitten. 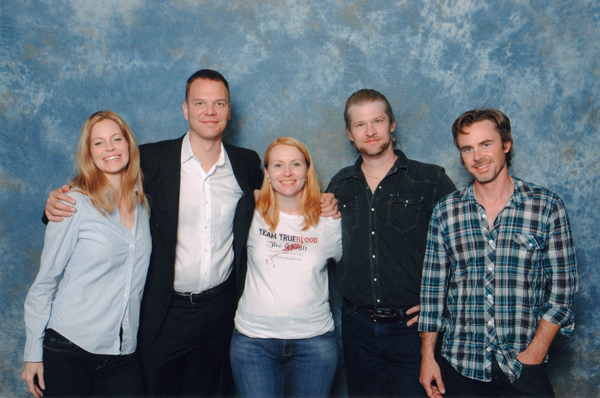 Convention days start early; we all had to be ready by 9am for the first photo shoot with Jim Parrack on Saturday morning. The restaurant was full with Truebies dressed in various True Blood t-shirts when I arrived for breakfast and Jim, dressed in a suit and sitting alone reading his bible, stood out. Going against all fan convention codes I walked over to say “good morning” and he invited me to join him.

Thirty minutes later day 2 of Bitten was in full force. Fans moved between the photo studio and the main hall to collect their autographs and get their pic taken with Kristin, Sam, Jim and Todd. 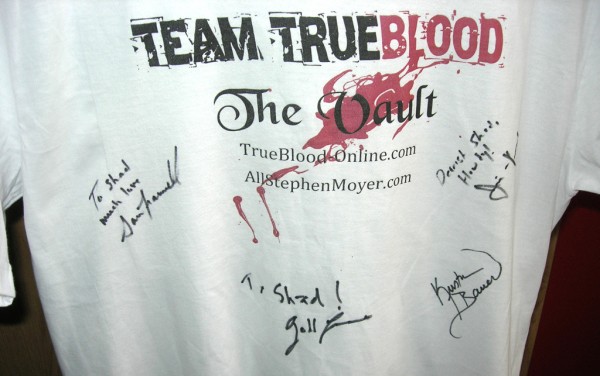 The four individual talks lasted about an hour each and they were all very interesting and entertaining. I had sent in several questions for each guest and I am proud to say that many of my questions were presented to the cast.  During the afternoon of the third day Jim and Todd did a talk together and so did Kristin and Sam and the last talk was with all four of them. Because season 3 has not yet aired in the UK we were not permitted to ask questions concerning season 3, but every now and then season 3 scenes were mentioned even though no big spoilers were revealed for those who had not yet seen it.

We were not allowed to record during the talks and it is hard to recall what was said exactly.  I will do my best to list some of the highlights. 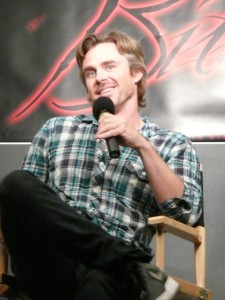 Sam did an impression of how Lafayette moves. Jim did the vocal impression: “You eat it the way I fucking make it!” Sam repeated the Andy lines that made him crack up on set over and over again: “Annie the Nanny”. Todd does a mean Willy Nelson. and the fans cheered when they all did “Sookie” the way Bill says it. Other favorite lines were “Smite me” from Sam, Kristin mentioned her Pam line about smiling too much and wearing pink, Todd loved his list of 10 and Jim was impressed by the lines where he tells Jessica that she is beautiful and shouldn’t be ashamed.

Nudity was mentioned of course, Sam told about awkward moments in his trailer with the make-up lady rubbing make-up on his naked body. Kristin recalled the season 3 scene where Alex and Natasha we the most comfortable on set and they were the ones that were naked. Sam didn’t like the butt of his body double in the season 1 finale and decided to do the graveyard scene himself.

Jim’s party trick is impossible to carry out for most people: walking in a straight line. Sam juggled with 3 bottles of water. Kristin could knot a cherry stem with her tongue (!) in college, but not any more: she is married now. Todd’s party trick left Kristin sitting for moments with her mouth open of surprise, which was: 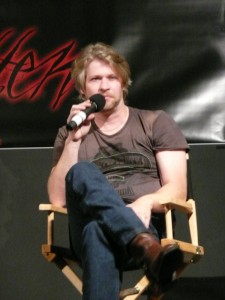 Kristin told a wonderful story about her audition for “Bones”, she gave the performance of a lifetime with shitty lines and got scared because she got the job and knew she would never be able to repeat her Oscar worthy performance. She never saw her “Bones” episode, but the paycheck cleared. She thinks it’s funny to say “Chris Bauer” to Chris Bauer every time she sees him, because how many shows have a Chris Bauer and a Kristin Bauer? Chris never smiles though…

One of the highlights of Jim’s life is his wedding day. Getting married was pretty special to Kristin as well, as was losing her virginity during the honeymoon. 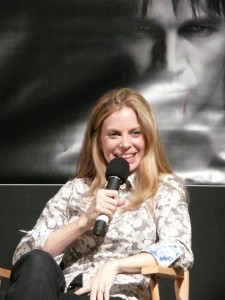 Todd would like to turn Terry into the Frankenstein monster, Sam wants to shapeshift into a dinosaur, Kristin is still impressed by the burgundy 80’s jumpsuit she wore, Sam would like to invent a gadget to keep his coffee hot (that’s called a thermos, Sammy). Kristin and Abri can never find the remote in bed.

Jim spoke about his director’s debut that he is working on with his wife and family called “Post”. “You all celebrate Christmas but like I died a couple of months ago.” He instructed his family before saying “action”.

Todd will spend some time recording with his Pilbilly Knights, Sam is on vacation in Italy right now and Kristin and Abri are in South Africa.

The message we received loud and clear from all of them is how much they enjoy being part of the True Blood family. They all feel fortunate and blessed to be able to work on this amazing show and they are very grateful for the love and enthusiasm of the fans. 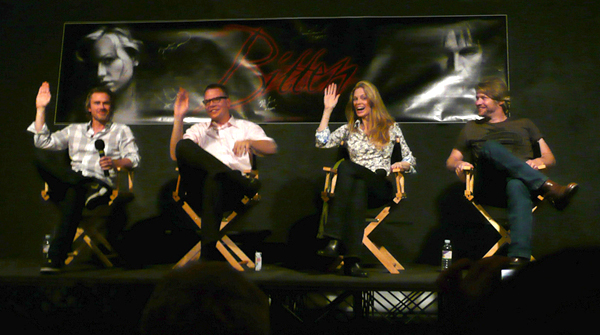 Saturday night the party theme was Fangtasia. The main hall was transformed into a vampire bar including Eric’s throne, grunge music and pole dancers. Many fans had dressed up in fangbanger style wearing vampire bait outfits. 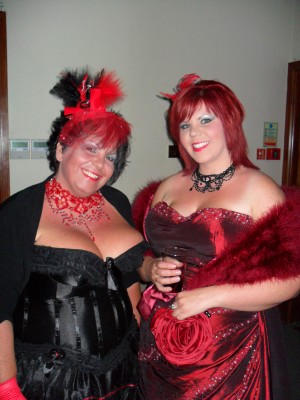 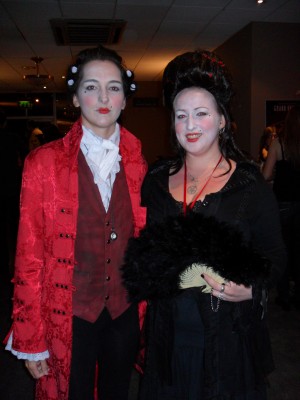 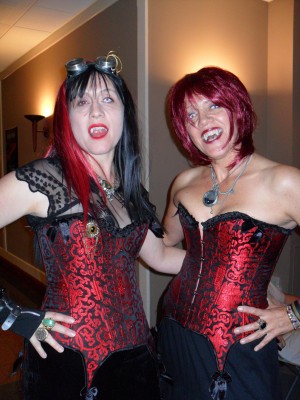 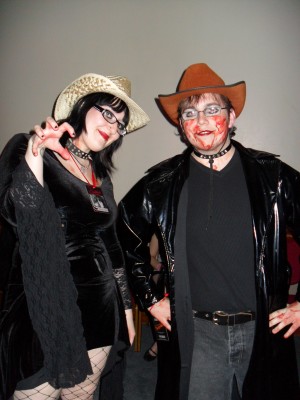 Kristin, Abri, Sam, Missy, Jim and Todd mingled amongst the fans, chatting with everyone that came up to them to say hello. All the fans were respectful and the guests were never crowded. They moved around the party, Todd and Jim even gave the pole a quick try and danced with fans.

Together with a few of my friends I had the chance to talk with Jim and Todd about season 3 and after the jet lagged cast had gone to sleep I chatted with Kristin’s husband Abri for some time. The next day I received a signed copy of his latest CD.

Sunday night’s party was in a smaller setting, many of the fans who lived nearby had gone home. The theme of the party was Descendants of the Glorious Dead and several fans had dressed up accordingly. 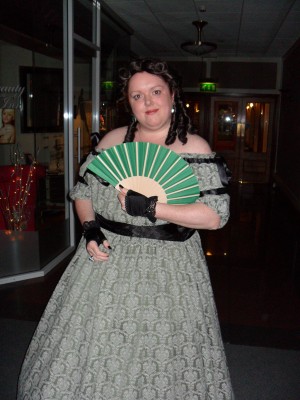 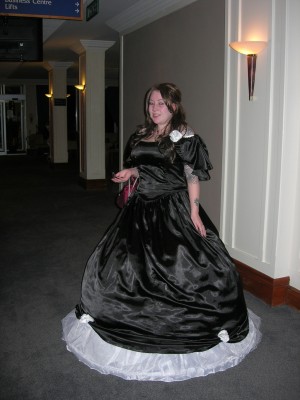 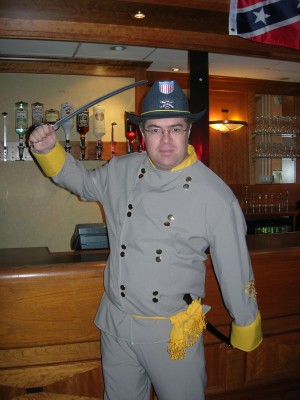 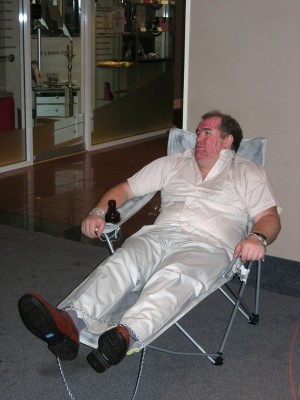 A special shout out to Jason Smith and his wonderful costumes.

When entering the lobby we ran into Kristin, Abri, Jim and Todd. Sam and Missy had already left for their vacation in Italy. We took a few photos with the guests and I spoke with Todd and Kristin. Entering the party again the men were dancing and Abri accompanied Kristin onto the dance floor while the fans cheered. 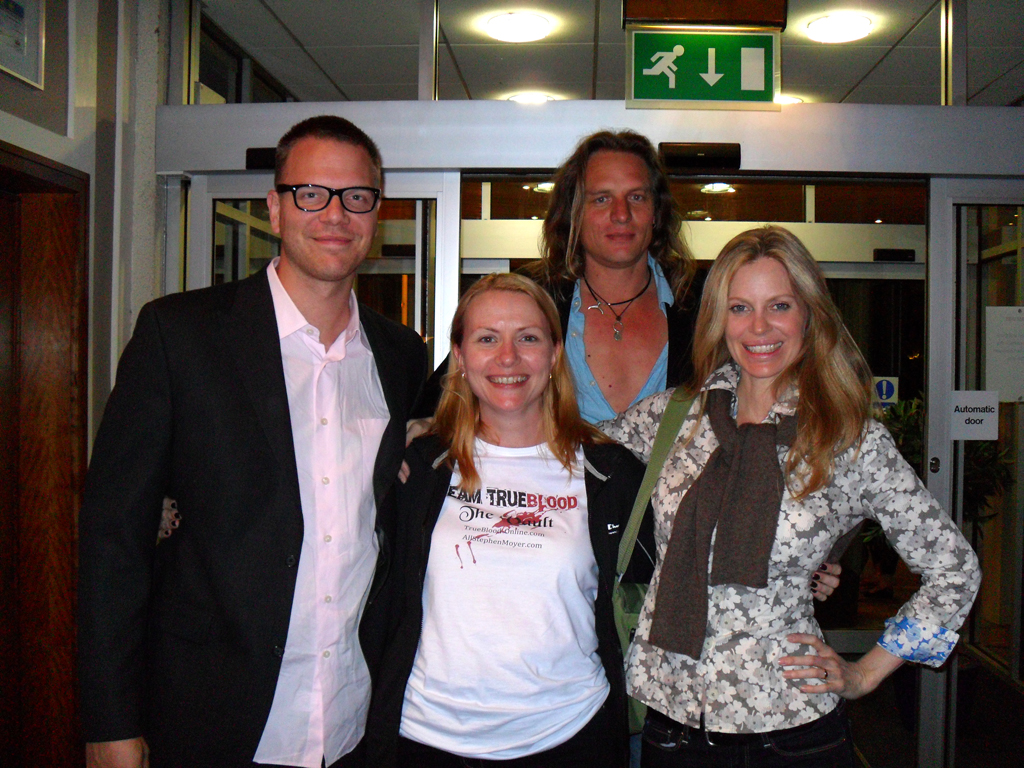 Bitten was a wonderful experience for both the fans and the guests. So much positive energy and love, we were all there because we share a passion: True Blood.

Bitten will be back in 2011, you can already buy your tickets in the Massive Events webstore.

Special thanks to Giles Golding for letting me use his photos.
http://blog.gilesgphotography.co.uk/2010/08/bitten.html

Special thanks to Tinchy and Mary for sharing their photos.

Check out the Photo Gallery for more photos from Bitten.