Book Reviews: True Blood and Philosophy: We Wanna Think Bad Things with You 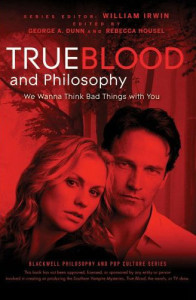 Billsbabe Lou, has read the book True Blood and Philosophy and below she shares her opinions about this interesting new look at the vampire series.

Have you ever dreamed of majoring in Merlotte’s? Studying the supernatural? Cramming  with (Bill) Compton, or educating with Eric (Northman)? Are you a valedictorian in vampology just waiting to happen?  Well, have no fear because True Blood and Philosophy: We Wanna Think Bad Things with You is here to take you to the head of the class!

I had the pleasure of reading this collection of essays recently, and I have to say it was quite an intriguing premise. I have seen countless discussions on message boards and blogs regarding some of these very subjects, but to have them gathered in one book made the experience just a bit more special. There was an impersonality at times to some of the articles that I thought could have been aided by more than just factual knowledge of the show, but that’s a small grievance at most.

As a business major who never made it past Intro to Philosophy in college, I thought that a book like this might talk down to the reader, but it was surprisingly accessible from the very first pages.  Sure, there are quotes from Aristotle and Plato, John Locke (no, not the character from “Lost” – I checked) and Sigmund Freud. Even the Bible is quoted on occasion, or maybe that was the Constitution.  I’ll have to check with Jason Stackhouse for clarification and get back to you.

True Blood and Philosophy definitely focuses on the vampires of the HBO show True Blood and the Southern Vampire Mystery books upon which the television program is based.  While all of the main characters are touched upon at one time or another, it’s the vampire’s origins, morality/ethics (or complete lack thereof), and general comportment that take up a vast number of the essays included.  As a certified fangbanger, I can tell you this is not a bad thing.

Among other vampire-centric pieces, I particularly enjoyed “’Honey, If We Can’t Kill People What’s the Point of Being a Vampire?’: Can Vampires Be Good Citizens?”  by William M. Curtis.  Not only is the title an awesome homage to the dearly departed Malcolm, it’s an interesting thesis on whether vampires can actually live among humans in a productive way. I’ve seen plenty of arguments for or against this simply based on human/vamp physiology and where we all fall on the food chain. However, this article goes deeper and looks at how the intensely hierarchical vampire society itself may be the thing keeping most vampires from realizing that maybe humans aren’t just blood-bags after all.

But for this fangbanger, it all comes back to the vamps.  In my opinion, if your blood runs hot for the cool-bodied and cold-blooded among us, you won’t be disappointed in this book. Not only will you have a thought-provoking read, but the helpful footnotes at the end of each chapter referring you to specific episodes and page numbers, as well as other referenced works, are a great resource and such a scholarly touch.