Cosplay (costume play) has taken a flight in the True Blood fandom and many fans enjoy dressing up as their favorite Bon Temps character, and not just for Halloween or fan conventions!

British Truebie Heulwen has taken her cosplay to the next level and will walk 26 miles around London at midnight dressed as her favorite character Sookie….. minus the Merlotte’s t-shirt… wearing just a bra.

The London MoonWalk is a nighttime power-walking marathon that will see its 14th edition this year.

“This is the 2nd time I’ve taken part in the Walk the Walk Moonwalk”, Heulwen explains to The Vault. “Last time was in 2009, where I accompanied 2 friends whose mum had had breast cancer. The night was immense – 15000 people all wearing bras walking around London at night. The air was electric with energy. Not only is it a great way to raise money for a fantastic cause (all money raised goes to breast cancer charities), it’s a brilliant way to lose weight too. I have combined healthy eating along with my 12-week training and have lost an awesome 25lbs – so I’m extremely happy about that! So the combination of using it as a goal to get healthy & fit, and raise much needed money for people who need is the reason I’m doing it!
…And if I can combine my love of dressing as Sookie with walking 26.2 miles in a bra around London at midnight, then sounds like a plan to me!” 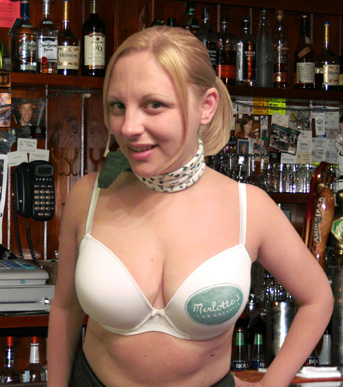 So why dress up as Sookie?

“Dressing up as Sookie is one of my favourite things to do. She has amazing dress sense – what’s not to love? She’s so cute!! Since I first discovered True Blood nearly 2 years ago, I immediately wanted to imitate her style. I wouldn’t necessarily wear her clothes on a day-to-day basis (some of those shorts are REALLY short!), so it’s great to dress up as her at conventions and escape into a fantasy world for a while. I love cosplay and making sure my costumes are as accurate as possible. I was over the moon when Audrey Fisher replied to an email when I needed to find out about what shoes I needed to complete one of my outfits.”

Heulwen has 5 complete Sookie outfits in her cosplay wardrobe, from the classic Merlotte’s look to the yellow outfit Sookie wore on the plane to Dallas. Right now she is working on completing her Lou Pine’s leather outfit that she will wear at the Bitten 2 True Blood convention in the UK this summer.

“I get my items from a number of places – some are official merchandise pieces, others are handmade (my mum made me the yellow skirt for my flight outfit – thanks mum!), and others are found after hours and hours of searching on eBay!! It’s so rewarding when your outfit looks just like it did in the show.”

And with whom should Sookie end up with according to Heulwen?

“I’m one of the few who love Sookie and Bill together. I’m really not an Eric fan, so definitely not him… Although if she’s got any sense, she should go get Sam!!! He’s the hottest man in Bon Temps after all”.

Good luck Sookie…. Huh Heulwen, let’s hope it won’t be too cold! And I really think the costume department of True Blood should get Sookie a bra like yours!

You can sponsor Heulwen’s MoonWalk, visit her MoonWalk profile for more info: http://www.walkthewalkfundraising.org/sookeh