Can’t Make it to Comic Con? Hook up with HBO CONNECT 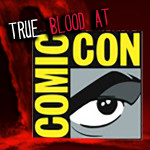 Next week is the gigantic event called, Comic Con San Diego 2014 where hundreds of thousands of fans will converge on the San Diego Convention Center.

True Blood stars will attend an event on Saturday at 5pm in Ballroom 20. Are you going?  For those people who can’t be there, they will still have live coverage to keep up with what is going on in the hall. HBO’s plan is as follows:

If Saturday rolls around and you find yourself unable to be in the panel rooms for these shows or can’t attend, don’t worry! HBO will be hosting live coverage on HBO Connect and through the hashtags for the True Blood (#TrueToTheEnd), Game of Thrones (#SurviveTheRealm), and Banshee (#SDCCBanshee) panels. All you have to do to be a virtual participant is to log in to HBO Connect on Saturday, July 26th at 5:00 PST for live coverage of the True Blood panel. HBO will also be tweeting, using the hashtag for True Blood (#TrueToTheEnd).

The Vault will be there attempting to fight the massive crowds to bring all the True Blood info to the fans.