Last Sunday, we saw Arlene and Terry’s house burn to the ground and when they came outside, the baby Mikey saw a beautiful lady and smiled as if happy to see her. We are all wondering who that woman could be, and presumably Carrie Preston knows, because she says:

“That’s not the last that we’ll see of her,” Carrie Preston teased to TV Fanatic. “And it will affect other storylines, as well. From there, the show goes to an interesting place it hasn’t gone to before.” 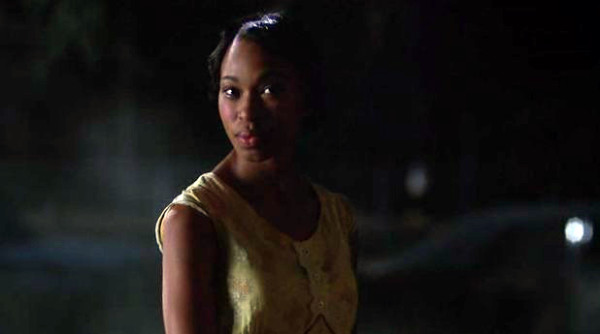 That’s all Preston would reveal, but it should be enough to keep viewers guessing and wondering over the next few weeks.

Overall, Arlene has stepped into the spotlight more than ever this season. Carrie labels the baby arc as “very exciting and fun,” although it “presents challenges.” Such as?

There’s often someone with a squeaky toy standing behind the camera.

“Acting with a baby is not something that comes naturally,” Preston said. “They’re really good babies, but they’re babies nonetheless.”

While she mostly knew all along where things were headed (“The writers don’t keep us in the dark.”), Preston enjoys this storyline because it keeps the audience guessing.

“They aren’t sure if it’s Arlene being her histrionic self, or if there’s something really wrong with the child.”

It sounds like we’ll find out soon enough, however.