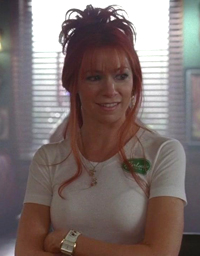 As we reported earlier, Carrie Preston was on last week’s “The Good Wife”. In an interview about the show with movieweb.com, Carrie also spoke about receiving the script for Episode 1 of Season 5 and  she assured us that fans will be pleased with the outcome.

Below are excerpts from the interview related to Season 5.

“As you know, I’m not allowed to say anything. I will say, I have read the first script. It is very exciting. It’s up to the usual True Blood standards with epic proportions of new characters and drama, and comedy. You know…Romance and everything else you’ve come to expect…I am excited to see where it will all go myself. We start shooting right after Thanksgiving. You will definitely get some questions answered right off the bat. Then, of course, a million more questions will come up, and those will propel us through the rest of the season, I am sure. But yes, the fans will definitely be satiated almost immediately.”

While Carrie Preston couldn’t divulge any pertinent story details, she did offer some insight into where she’d like to see her character go in True Blood Season 5.

“Well, you know…We left it off where there was this mysterious guy that has come back into Terry’s life. That is being played by Scott Foley. It will be interesting to see how that will start to impact the home life. I trust that the writers and Alan Ball will take the role to places that I can’t even imagine. I try not to speculate. Because I would never have thought that I would have gotten pregnant, and that I would have a demon baby. But it’s not a demon baby, its possessed by a ghost. If I tried to dream that up? I couldn’t have. I just put myself in their very capable hands. And I enjoy the ride.”

Though she hasn’t been privy to any new casting announcements, Carrie Preston has revealed that there will be quite a few new characters this next year, when the series returns.

“I have no idea (about the casting). I am sure there will be surprises. There are new characters in the script, in just that first episode alone. I have no idea who will be playing them. We tend to beef up our already large cast with really wonderful guest players. I am assuming that True Blood Season 5 won’t be any different than what they’ve done in terms of that previously.”