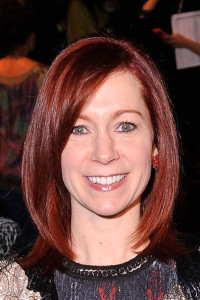 True Blood’s Carrie Preston, was interviewed by Zap2It while promoting her April 29 appearance on “Person of Interest,” and she teased that True Blood Season 7 is aiming for a huge finale.

“We’re not done shooting. We have 10 episodes to shoot, and we just started doing some work on episode 7. We still have three more to go, and the actors have not seen the script for 8, 9 and 10. None of us are even sure how things are going to be wrapping up,” Preston says. “It is a story about fear of intimacy. I feel like there will be some resolution to that and there will be a returning to that theme in a really, I think, satisfying way.

“I’m confident that it’s going to be a season that’s going to keep people on the edge of their seats. Even the first episode alone, there’s some events that people are really going to be shocked at. It’s very exciting, and we’re all bonding in a much stronger way because we all know the end is near and come July we’ll be done shooting it. We’re all hanging on to every moment.“

Expect to see a lot of “True Blood’s” large cast come together in the final season. Preston teases a recent scene which had her co-star Anna Paquin comment on the huge amount of people in one area.

“The writers have quite the task to wrap up seven years of story, not to mention scores of characters. I mean, recently we were shooting something and Anna said, ‘I think this looks like a meeting at the Screen Actors Guild,’ there were so many people,” Preston says with a laugh.

As for whether or not “True Blood” will have some semblance of a happy ending, Preston responds,

“I don’t know what your definition of ‘happy’ is. This is a story about Sookie Stackhouse, and her evolution of going from a young woman to a fully realized mature woman. With that comes experience, and with experience comes revelations and joy and discipline. I think that those kinds of things have been a part of the show from the beginning, but I think that this season is definitely going to focus on her journey, as it should.”

We can’t wait to find out more and see True Blood even though it will be bittersweet seeing out favorite show come to an end.  What do you think of Carrie’s hints about Season 7? Leave us comments below!