Cast Give hints at Premiere about True Blood Season 6 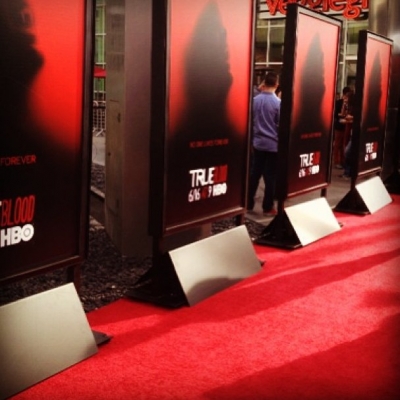 Last night when the cast gathered for a blood-themed premiere party in Hollywood to celebrate the return of True Blood Season 6 they spoke to the Hollywood Reporter about the new season.

As all the fans remember, at the end of season five, most of the residents of Bon Temps were in peril in one form or another, with the biggest threat being Bill Compton , who had just drank the blood of Lilith, the first vampire, and been born again as a blood-covered (and possibly evil) being.

Below are some hints that the cast gave about what we can expect this coming season:

The new season promises to present plenty of threats for many of the characters, who will not only deal with the new Bill, but also increasing tension between humans and vampires and new complicated relationships. “We’re at war,” said Wesley, who plays newly made vampire Tara. “They shut down all vampire-run business, there’s a curfew. It’s really tough to survive.” Wesley also told THR that she’s involved in “a really cool stunt” in a very bloody scene later in the season. “But I can’t really tell you what it is,” she added.

Deborah Ann Woll, who plays Jessica, Bill’s vampire progeny, told THR that it’ll be a very bloody, dirty season for her as well.

“I feel like every other day I’m covered in blood or dirt of some kind,” she said. Woll said that for the premiere episode, which was directed by Moyer, they shot a very intense scene for five nights in a row. “By the end of that I think I had blood on 75 percent of my body,” she said. “And it was the kind of thing where a week later I was still finding it in my ears.”

Anna Camp, who is returning as Sarah Newlin, the Southern preacher’s wife who is not a fan of vampires, also told THR that she’s involved in a bloody scene that left its mark on her.

“I have a lot of bruises from shooting a bloody, bloody scene. I had to put some makeup on them,” she said. “I just shot it last week. It’s by far the craziest thing I’ve ever done.”

Camp’s character first appeared in the second season of the show, and is returning with a very specific cause this year.

“This has been one of my favorite roles that I’ve ever played, ever in my life,” said Camp, adding that she bases the character on her mother, who is from South Carolina.

Camp’s character will get to reunite with her former husband, Steve Newlin, who was once a conservative reverend, but became a gay vampire. Rev. Newlin will get to be a part of some pretty “wild stuff,” said Michael McMillian, who plays Steve.