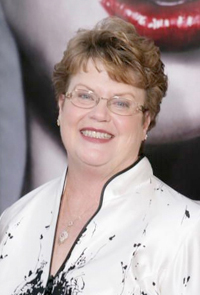 As we True Blood fans know, Charlaine Harris has announced that the bestselling Sookie Stackhouse novels on which our favorite show is based will conclude with the thirteenth volume (volume 12 is due out next year).

Recently FearNet sat down with the author for an extensive interview, which will be presented in three parts. The next two parts will focus on Harris’s thoughts about True Blood and on her upcoming graphic novel Cemetery Girl.

Below are portions of the first part of the conversation, in which Harris discusses her approach to writing, her influences, the creation of Sookie Stackhouse, the character’s upcoming final adventures, and what she might do next.

You just finished writing the twelfth Sookie Stackhouse novel…
The penultimate book, because I’m going to finish with the thirteenth.
Is it tough to finish this series, to let it go?
It’s tough to walk away from the money. [Laughs.] Yeah, it is going to be tough.

You’ve written plenty of other novels beside the Southern Vampire Mysteries. Do you have a long list of things you’ve put on the back burner because of Sookie?
Yes, I do. [Laughs.] And honestly it is so exciting to do something different.

How far into the thirteenth Stackhouse novel are you?
Zero! [Laughs.] That’s my next project. When I get home I have to go over the copy-edited pages of Sookie 12, which will be out in May. That will freshen up my memory about what I need to do in Sookie 13, to tie everything together. A seemingly impossible task.

I’m sure you’ve been asked this before, but could you talk about what the twelfth novel will involve?
It’s called Deadlocked. It’s another extension of her adventures, moving a step forward to resolve many of the issues that are brought up in previous books. She gets kidnapped – you know, the usual mayhem. She gets kidnapped, she has to get out of it. The Fey entry into her life is pretty much wrapped up. She learns a lot more about everything really. She learns a lot in this book, the truth. So it was a challenging book to write, and I tried to keep it on track more as a mystery. But there are just so many loose ends to tie up, it’s just incredible. [Laughs.]

Even though Sookie is a mature woman, do you view the entire series, on one level, as a coming-of-age story?
The growth of her character is definitely a major part of the novels, but I wouldn’t call it coming-of-age. She’s a twenty-six year-old woman. But she certainly becomes worldlier, more aware of the other worlds around her. She’s always known what human nature was like, because she’s telepathic. Which is kind of a bitter pill to swallow. But she learns how to live with a lot of things, and what she can’t live with.

Read the rest of Part 1 of the interview by going to: fearnet.com