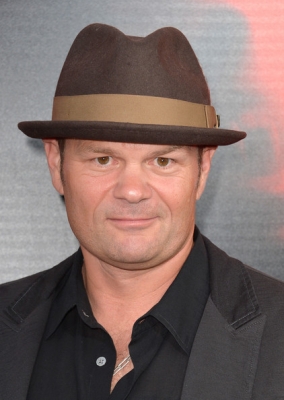 We love Chris Bauer, he is one of the most talented of the all star cast that is True Blood.  Chris has been on the show since the beginning and it’s been a joy to see him in a few short days become the father of four faerie daughters, three of whom have just been drained to death by an out-of-control vampire. What Andy doesn’t know when he goes to the Compton house to find his daughters is that it was Jessica, not Bill, who killed his daughters, and that Bill as Billith is stronger than he can imagine.

Chris Bauer, chatted with Vulture about faery fatherhood, ancestral incest, and more in the interview below:

Are we headed toward a turning point for Andy? Despite being sympathetic to vampires before, he might not remain so.
Andy really has to draw a line for himself between power and powerless. And I personally find that line to be one of the most deep and rich veins of humanity. There’s a lot of hubris that goes into thinking you can avenge anything, that you can affect the world in such a way that creates justice. On the other hand, there’s a lot of shame and impotence if you can’t affect your world at all. I think it’s extremely human. So there’s a real energetic chess game of how the humans are navigating this world right now. It’s psycho-emotional, and it’s a power struggle. When Andy confronts Bill, or even vice versa, because Andy is involved in some things that Bill needs also, it will be purely dramatic, bottom line.

Andy and Bill are kin — Bill is his great-great-great-great-grandfather. Which is why Andy’s sister Portia hooking up with Bill was incest. And in this episode, we learn that Niall, Sookie’s great-grandfather, is Warlow’s kid. So Sookie is Warlow’s great-great-granddaughter — that’s a lot of ancestral incest for one town …
Right! A-plus. The whole genealogy and family tree of this town does loop over on itself, especially with the people who’ve died and come back to life, so to speak, which just makes it even more confusing. But it’s absolutely right that biographically not only are Bill and I related, but if I had children, they’re related to him also.

Does that mean you can call him Grandpa Bill now, instead of Vampire Bill?
[Laughs heartily.] That’s an idea that I’m going to steal.

Does the surviving girl get a name now, instead of a number?
Yes. Can I say that? She does get a name. I think it doesn’t happen until episode six.

Even though she looks 18 now, she’s still a baby. She’s only a few days old. Even if she does like to party already …
That was what was so interesting. We had to discuss how emotionally invested you can get in people in three days. You have to take in that it’s three days in True Blood time, not three days in real time. So I did have to figure out how to manifest a subtle level of realism, because I’ve only known these girls for a few days, which is a slightly different emotional frequency than if they had been 18. But our actual human response to children is a sense of instant bond, instant protection, instant affection, instant concern for their well-being and future. So I just went to that.

Did you get to spend much time with any of the groups of actresses playing your daughters at their respective ages, or was it just a revolving door?
You know, I’m immature and underdeveloped, and consequently kind of antisocial. [Laughs.] So it takes a while before I have a conversation with anybody at work. Although I have to say the little teeny girls were so sweet and so adorable and reminded me of my own daughter when she was at that age, that it barely felt like a day at work. They didn’t understand things like camera direction or how to find the lens, so when you do those scenes with the little teeny girls early on in the season, I would say my line and remind them where to look, remind them what to say, they would have their reaction, and I would say my line, and they would just cut out all my on-camera direction. It was very cute.

Vampire progeny aren’t quite the same as human progeny, although technically you could say that they’re “blood-related.” But Bill’s progeny just killed Andy’s progeny, without realizing that they’re all related in some way.
And obviously the show is hitting that point on purpose, because it’s one of the ways we’ve refocused True Blood this season to one of its original themes, which is, How do people in that amount of space get along with each other when they are people with really different beliefs, life experiences, philosophies? It’s like two species trying to get along, even though externally we look the same. That’s where all the racism, all the homophobia, all the sexism, all the diminishing-others-for-their-differences comes from. It’s so applicable.

To read the rest of this interview, go to: vulture.com