We’re so glad to see that the wonderful Chris Bauer’s Andy Bellefleur has really come into his own this season on True Blood. His character used to be a bumbling, angry, and unhappy guy; but now that he has a love interest in Holly and a faery daughter named Adilyn, all that has changed. We were also glad to see Chris attend Comic Con this year for the first time; he so deserved to be there.

Below is part of an interview with Chris where he discusses Andy now and then. 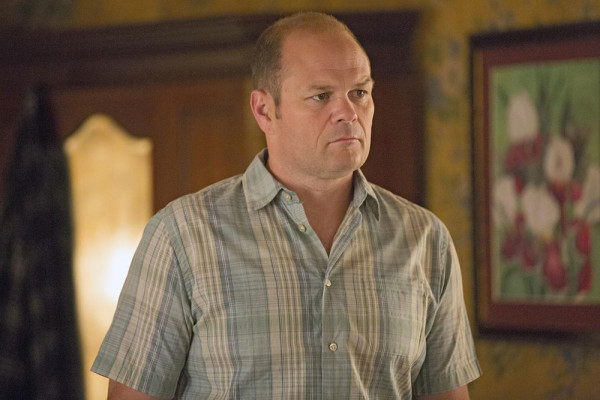 I think he reaches a point in a very subversive and dangerous way, the most taboo state of being for a character on television, let alone for a real person, which is, I do not know what to do next. I am totally dissembling. I don’t know how to breathe next. I don’t know how to think next. I don’t know who to ask for help. The given circumstances of my life have become too overwhelming to manage. And rather than reinvest in some external aspect of his identity — the cop, the redneck, the hard ass — he just crumbles. Which is so exciting, because that means vulnerability has become an acceptable state of being for him, and by submitting to that, Holly comes to his rescue and says, “You are not alone.” He gets out of that moment on the strength of knowing that he’s not alone, which circles back to the theme of the whole show, which is we cannot do it alone. We have to learn to get along together, especially those who scare us.

What’s been exciting about it from the beginning is this is about how do real people get along with others who don’t feel real to them? In other words, if you’re a vampire, if you’re a werewolf, if you’re a shapeshifter, I don’t really have to take you that seriously, as a human, because you’re weird. You’re different. You’re not like me. So that theme, however much we might have strayed away from it in the middle seasons, has always been the backbone, and now in the seventh season, starting to look at these characters who you’ve gotten to know express some pain and exasperation that has come from them trying to survive in this world full of difference is really powerful. And ironically, totally realistic. At the very least, watching a character such as Andy, who started as this character who as soon as he got onscreen you were waiting for him to trip and fall, winding down the series as a viable manifestation of maleness and authority, is a great, great journey.

And he’s gotten to have some incredible moments lately, on a human level, such as confronting Jessica. Take out the supernatural element and it’s still meaningful.

In a way, it’s like bringing this whole experience slowly back down to something that’s more tangible on a human level, by having these characters express what it has emotionally cost them to live in this world. It’s as much about the real world as the crazy supernatural creatures populating it. On that level, what does it cost you to stay emotionally present in this world of chaos, loss, grief, hope? And it’s the kind of insight that you don’t really have access to, unless you’re starting to chill the fuck out and stop inflicting yourself on the world. Instead you’re inventorying who you are, and what’s going with you. Introspective and reflective. That’s a massively foreign state of being for the Andy Bellefleur that started on True Blood. And then to take it to another level, by offering that information to Jessica, I don’t think he’s trying to say, “Hey, do me a favor and help me feel better.” I think he’s trying to say, “You’re a vampire, I’m a human, but there’s a common solution that can make both of us feel better and move forward in our lives.” It’s a mini–peace treaty. And these characters having compassion together has a very unifying effect on the whole town.

Maybe too much unity can be a bad thing? Even when they’re warned, these two teenagers don’t seem to be aware that they’re almost committing incest ..

Well, look — I feel like telling teenagers anything is like putting a couple dice in your hand and just throwing them on the table. [Laughs] I also think that if there is something that subtly determines what does or does not happen in Bon Temps, it is the laws of nature. We’re all trying to catch up to momentum and the ferocity of nature, and when we fight it, it generally does us no good.

Which is why Holly backs down from calling Adilynn a slut just because she’s fae. It’s nice that they settled that argument without shaming female sexuality, even if

Holly might not think of Adilyn’s faerie mother in the best light.

It’s dignified, and nobody ends up being called a name! And by the way, if faeries were sluts, I don’t know if this logic tracks, if Andy Bellefleur is walking through the woods, especially fifth season Andy Bellefleur, and Maurella, who is a ten in the real world and the faerie world, picks him, there has to be more motivation behind that than tapping into her slut jones. There’s something about his demeanor and energy, similar to the maenad Maryann Forester. She saw an energy at that time that was just unadulterated rage in Andy, but saw an energy that invited a supernatural interest in his humanity, because he’s such a real guy. He’s such a real guy that especially these female supernaturals find him intriguing.

I know! What’s up with that? That’s a shout-out for the bald 47-year-olds! [Laughs] I think he’s so real that they see nature manifesting in him on its own terms, and that’s something they’re just drawn to. [Pause] Oh! There’s a little mole that just fell in my pool. I gotta get this out.