Chris Bauer To Star in New Play in New York 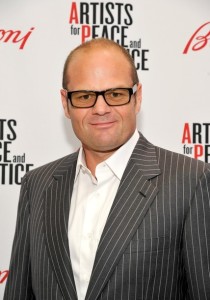 True Blood’s Chris Bauer will star in a production of “What Rhymes With America” a new work by by Melissa James Gibson for the Atlantic Theater Company.

Bauer, said in a phone interview from Los Angeles that he was desperate to hit the stage again.

“I’ve told my children to think of this as though I’m going for a life-saving operation,” he said. “The opportunity to work on a play from the ground up in my favorite theater with all new people, makes me feel like there’s a real potential for reinvigoration.”

The cast also includes Aimee Carrero, who currently stars on the Cartoon Network live-action series “Level Up”; Seana Kofoed, on Broadway in “Proof” and “Night Must Fall”; and Da’Vine Joy Randolph, who earned a Tony Award nomination for “Ghost: The Musical.”

It will be directed by Daniel Aukin, who recently staged Joshua Harmon’s play “Bad Jews” and Sam Shepard’s “Heartless” off-Broadway and “4000 Miles” by Amy Herzog at Lincoln Center. Previews of “What Rhymes With America” begin Nov. 19. The play opens Dec. 12.

Bauer, a company member of the Atlantic Theater Company, has appeared in three Jezz Butterworth’s plays at the Atlantic — “The Night Heron,” ”Parlour Song” and “Mojo.”

Bauer was last on stage in 2010 doing David Mamet’s “Romance” at the Bay Street Theater in Sag Harbor. Though it had a short run, “it was long enough for me to see how totally out of shape I was,” he said laughing.

“There’s a level of fitness that’s required to give an audience what they deserve. You just do not get the strength in those muscles on television.”