Comic Book based on True Blood out this summer

Great news, now here’s a comic book that you can sink your teeth into. It’s just been announced that a new comic book format based on the True Blood show is to launch this summer.

HBO and IDW Publishing are thrilled to announce an exclusive partnership to produce a multiple, all-new comic book series based on the network’s hit show True Blood.  Premiering at San Diego Comic-Con in July, this sexy, visually striking comic series will add new and unique layers of supernatural drama to the wildly original Emmy®- and Golden Globe®-winning television show. Developed closely with the show’s Oscar®-winning creator,Alan Ball (HBO’s Six Feet Under,American Beauty), IDW’s True Blood series are the exclusive, official comics for the show and will be available in both print and digital formats.

The first six-issue True Blood comic series offers the same erotically-charged romance, wry humor and intriguing mystery and suspense the show has become known for. The plot was developed with Ball, along with series writers Elisabeth Finch and Kate Barnow, and co-written by David Tischman and Mariah Huehner. Beautifully illustrated by top tier artist David Messina, the series captures all the bloody details and sexy reveals of this exciting new adventure. Renowned artist J. Scott Campbell will join Messina in providing covers for each issue.

In the first storyline, Sookie and the rest of Bon Temps find themselves waiting in Merlotte’s bar for a strangely portentous raging storm to subside. Soon, they discover they’ve been trapped by an entity that feeds off of raw emotions and begins killing off the patrons one by one until his hunger is sated.

The creator of HBO’s “True Blood” Alan Ball announces the new IDW comic book series based on the popular show in the video below and he talks about it debuting this July at Comic-Con International in San Diego.

You can pre-order the comic book in the HBO online shop.

Here’s a sample of what you can expect the characters to look like in the comic book: 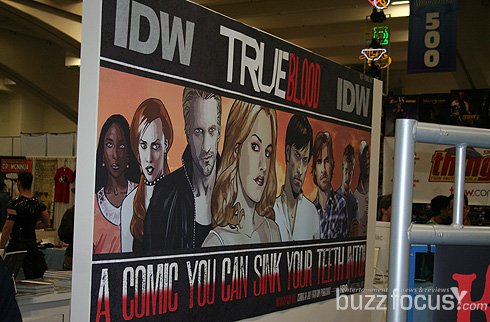