When writer/director Alan Ball hired Checco Varese, AMC to shoot the pilot for HBO’s horror fantasy True Blood, the cinematographer spent the next several nights “doing my homework,” he says. “I watched everything I could that was on TV at 10 p.m. I flipped to one channel, and it looked fantastic; the show was moody and had lots of camera energy and a bit of a blue tone. Then I flipped the channel, and that show looked great, but it looked just like the first one. Then I flipped again, and again, and saw that most of the shows looked the same. That’s not the case now — there are a lot of great shows with a lot of great looks — but at the time, they all looked the same to me! I thought True Blood merited a very different look, something sweaty, hot and sexy, which is what Louisiana feels like. Alan, [production designer] Suzuki Ingerslev and I decided to make it a saturated show, with red reds and green greens.” 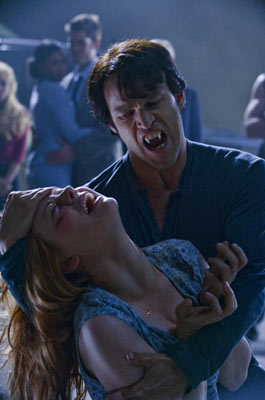 Another key component of the look is humidity, which had to be artificially created for the Los Angeles-based production. “When you’re in a very humid climate, there isn’t any dust,” notes Varese. “So whenever we shot an exterior, I made sure every inch was wet down.” Fire hoses were used to wet down the vegetation in the background and Hudson sprayers were used to saturate the closer greens. “I was obsessed with that detail because I think it really refines the look,” says Varese. “When you see those details in the trees in the background and the sheen in the foreground, it really looks like Louisiana. The constant wetness was tough on the actors, but it really enhanced the look.”

Set in the sleepy town of Bon Temps, La., True Blood is based on Charlaine Harris’ Southern Vampire Series, which was begun in 2001 with the publication of Dead Until Dark. The invention of synthetic blood has enabled vampires to integrate themselves into human society, but the transition has not been smooth. Tensions in town reach a boiling point when a comely local, Sookie Stackhouse (Anna Paquin), takes up with a vampire, Bill Compton (Stephen Moyer), and Sookie’s associates and loved ones begin turning up dead.

Varese achieved his night-exterior look by pushing Kodak Vision2 Expression 500T 5229 by 1 1/2 stops (to 1,500 ISO) and overexposing his highlights and deeply underexposing the shadows while maintaining skin tones right at key. “I wanted the night look to have a rough-around-the-edges feeling, and pushing the stock a stop and a half gave it more texture and grain without making it grainy. You have to control your tones, however.”

To create overall ambience for night exteriors, key grip Miguel Benavides and gaffer Jonathon Bradley strung lines of aircraft cable 40′ above the ground, just over the trees, in a small section of the Warner Bros. backlot in Burbank. From the cables, they hung rows of 6K space lights. Then Varese incorporated an LRX Piranha, an 80′ boom arm with three remote-controlled fixtures, a 12K HMI and a 12K tungsten as his moonlight backlight.

Varese always made sure the “good guys” had an eyelight. For “bad guys” and ambiguous characters, he eliminated any reflections in their eyes, ensuring they had a dull-eyed look. He even went as far as blocking out windows and masking set items to eliminate any reflective sparkle in the characters’ eyes.

When shooting a pilot, “you’re responsible for creating something that’s repeatable,” Varese notes. “So even though you always have extra time on a pilot, you can’t get too extravagant or too exotic. If the show is picked up, what you’re doing has to translate into the flow of a regular production. You have to make sure your choices are flexible enough to last.”

After True Blood was picked up for a full season, Varese began working in rotation with cinematographer Matthew Jensen, but after the first few episodes, the writers’ strike brought production to a halt. Varese took a job on a feature, and when the strike was resolved, he was unavailable to return to True Blood, so Jensen took over as the show’s primary cinematographer. (John B. Aronson and Amy Vincent, ASC also shot episodes in the first season. For the second season, which will begin airing in June, Romeo Tirone will alternate episodes with Jensen.)

“Matt and I collaborated in a very organic way,” Varese recalls. “I never sat down with him and said, ‘This is how you have to do it,’ because every cinematographer has his own style.” Jensen adds, “Checco and I talked a little bit about a few aesthetic ideas, but the beginning of the season was so crazy that we didn’t have much time to talk. I watched the pilot many times, and we discussed the improvements Checco wanted to make.”

Jensen helped refine the show’s visual language through lens selection and camera positioning. “I wanted to avoid shooting on long lenses because that has become standard TV grammar, and also, I feel Suzuki’s phenomenal sets really lend themselves to shooting with wider lenses,” says Jensen. “Most of them have actual hardwood floors and hard ceilings, so you want to see the whole set. I also wanted to experiment with moving the camera closer to the actor for a close-up instead of shooting it with a 75mm lens; I’d rather use a 40mm and move closer because that puts the audience in the middle of the action. We were usually shooting with a 25mm, 27mm or 40mm Cooke S4, and occasionally even an 18mm. For day exteriors, I’d usually pull out the Optimo zoom, but onstage we were mostly shooting with primes.”

Jensen typically lights the sets to a T2.8 and works at T5.6/8 for day exteriors. “With the wider lenses at a T2.8, there’s a nice feeling to the falloff. I love to get the camera close to someone with a 40mm lens and see that shallow depth of field with a very gentle falloff in the focus.”

Telepathic waitress Sookie Stackhouse (Anna Paquin) takes an order at Merlotte’s Bar and Grill, a set that created some challenges for the crew.

One of the show’s key sets is Merlotte’s Bar and Grill, where Sookie is a waitress. It’s a place where several of the main characters gather at least once per episode. “That’s where we do our highest page count each episode,” says Jensen. “Alan [Ball] was very specific that he wanted it to feel like a family place. We first considered using practicals and neon to light the set, but that proved to be a little too moody, so then we started rigging all the ceilings with fixtures, but that was tough because they’re hard ceilings, and we’re shooting so wide that we’re nearly always seeing them. We had to cut away sections of the ceiling that could be removed when they were off-camera so we could position Kino Flo DMX fixtures there. For season two, we’re cutting back a bit on the lighting budget, so the Kinos had to go. My gaffer, Evans Brown, came up with a fixture he calls ‘Triffids’ [named for The Day of the Triffids], which are basically homemade lightboxes. He took 750-watt Nooks and built an aluminum casing around them, sprayed black on the outside and white on the inside, and then faced them with 1000H. We have dozens of them in the ceiling; they have a nice, soft spread but can be really punchy. They’ve enabled me to lift the base in Merlotte’s and get more exposure to show off more wood in the sets.”

Jensen also found lighting behind the bar to be a bit of a challenge, thanks to a header built into the set above the bar. He and Brown incorporated “Razor” lights, which were created by Denny Eccelston, Varese’s feature-film gaffer; the fixtures feature two black PVC pipes with long slots cut into one side, and a 2′ or 4′ Kino Flo tube is placed inside the inner pipe. By rotating the two pipes in opposite directions, the user can adjust the intensity of the light (by controlling how much light spills out the larger slot) as well as its direction. “They’re great tools for getting an edgelight or a little keylight into places where you just can’t put any other fixture,” Jensen says.

The house Sookie shares with her grandmother, Adele (Lois Smith), is a location that initially gave Jensen some problems. “The house is small, and there’s a lot of white, especially in the kitchen, where a lot of action takes place,” he says. “Although white walls are usually something a cinematographer shies away from, I found them to be a blessing. We’re normally in the kitchen in the mornings or during the day, and I found I could really underlight the interior and have a lot of light blasting outside on our TransLite and Chromatrans backings. I try to light them to about 3 to 5 stops over key, reflected reading. I shoot on 5229, and I’m amazed at how much detail holds in the highlights and the blacks. Because the drops are highly reflective, we found that any unit on the floor could cause a really bad glare, so we rigged cyc-strips on pipes far above the drops. We have I-beams on chain motors that hold our ‘sun,’ which we made with a 20K tungsten and 12-Light MaxiBrutes in season one. For season two, we’ve replaced them with Big-Eye 10Ks with T-12 globes and Leonetti’s Master Blasters, single fixtures with four 1K FCM globes; they’re really punchy but take up less space.”

With the overexposure outside the windows, Jensen will set the interior exposure as much as 2 stops under. “I also tend to fill inside with 1/4 CTB, and we use a lot of smoke in the kitchen to add atmosphere and a sense of humidity. It works well.

“So much of the first season of a show is trying to figure out what works and what doesn’t,” he concludes. “It’s really a process because you rarely have time for extensive testing. You need four or five episodes to figure out how the actors photograph, what effects look realistic, how dark the night should be and so forth. We try to continue to refine the look to keep it fresh for us and the audience.”