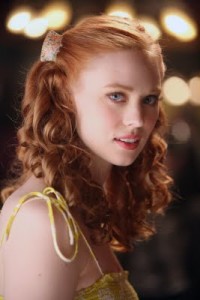 Deborah Ann Woll is a fan favorite as Jessica Hamby in True Blood. Deborah Ann answered some questions for the Australian site Nine to Five recently and below are excerpts from that interview:

So how was Comic-Con for you?
I love Comic-Con, those are my people. I’m a big nerd myself so I really enjoy going!

Did you dress up as a vampire?
I did. I attend Comic-Con as a viewer as well, so it would take me way too long to get from panel to panel if people knew who I was. I was Cousin It (laughs) from The Addams Family…

Were you really?
I was, and nobody made me. I have pictures. I had a really good time actually, and then I ended up at the IDW Booth, which is the company that is publishing the True Blood comic book, so I ended up there, removing the costume in front of the fans there. We had a nice moment.

Have you read the comic books?
I am a little bit into comic books. My boyfriend is a huge comic book collector, so I proxy own about 50,000 comic books. But for me, I’m into stories, so some of the really, really great comic book stories I definitely go for.

And the True Blood comic books?
Yeah, well one of my good friends, the man who played Reverend Steve Newlan on our show, in the second season, Michael McMillian, he wrote in the second series in the True Blood comic books, and he did a fantastic job. He put Jessica kind of at the centre of the story, which is really cool, so there’s been this amazing artwork of Jessica that’s really fun. Besides them giving me double D’s, it’s all kind of cool. (laughter)

Talk a little bit about your character in Season Four, what’s happening to her?
Oh God, everything! Jess’s story has been kind of a coming-of-age story… this sort of transformation of a girl to woman and human to vampire, and finding your first love. She’s been struggling with who she is personally. So that’s sort of the direction that this takes, she actually really embraces the vampire side of herself.

Do you get the whole script for the season or just little by little?
No, just little by little. We are very much in the dark as the seasons go on and I do find myself sitting at home going I wonder, I wonder what’s going to happen. Right now it’s really tough, because I know the rest of this season, but now I’m waiting for season five, so I’m stuck on a cliff-hanger.

When did you discover that you had a passion for acting?
I’ve always known it, even when I was a little girl. We have videotapes of me in turtle costumes with little patent leather taps on and I’m just dancing for my mom. I knew that I liked telling stories. I knew that I liked pretending that I was something else or someone else, and it just naturally very much flowed into acting.

To read this entire interview go to: nine-to-five.whereilive.com.au