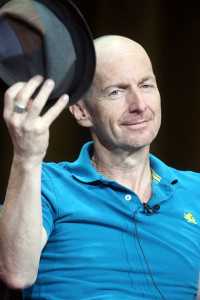 Denis emphasized this in a sit-down chat with TV Guide (watch the video below).

“Liz Taylor is,” he adds with a dramatic flourish of his hands. Liz Taylor is, in fact, the Elizabeth Taylor obsessed employee of Hotel who, presumably under the aegis of Gaga’s Countess Elizabeth, does all the menial work around the office. “I bartend, I change lightbulbs, I do the reception desk, I clean up mess, whatever that means.” O’Hare also revealed that he works closely with Kathy Bates’ vindictive character Iris, so we may reasonably expect Liz Taylor to channel some of the instability of the real life Elizabeth’s later years, forming part of the unsettlingly demonic staff of this year’s Hotel.