Denis O’Hare On Return to True Blood with Interview Magazine 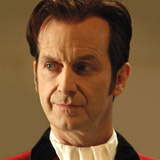 Speaking to Interview Magazine, Denis O’Hare talks about his return to True Blood and also his other roles of Larry on FX’s Americna Horror Story and “the baker” in Stephen Sondheim’s fairy-tale amalgamation musical, Into the Woods, at the Delacorte Theater (which celebrates its 50th anniversary this year) in Central Park, New York.

Below are excerpts of the interview with Denis that relate to True Blood:

BROWN: What was your first professional acting role?
O’HARE: Well, it depends on what you mean by professionally. Everyone kind of counts it differently. I went to Northwestern in Chicago, in Evanston and then I ended up trickling down in Chicago theater. I did a bunch of plays, but I was non-equity. For a lot of people, non-equity means you’re not yet professional. But for me, if you’re in a mainstream theater, you’re doing something real. So my first real gig after college was a play called Never the Sinner by the screenwriter John Logan, who is now pretty famous for things like The Aviator for Hugo and Gladiator—he’s a big screenwriter, but we were pals in college and he wrote a bunch of plays I did. So that was my first sort of gig in Chicago. My first paying gig was a play called The Voice of the Prairie at a theater that no longer exists in Chicago called Wisdom Bridge. I played a fast-talking radio huckster—a salesman of crystal sets in the 1920s—and I actually won an award. Look at that! And then promptly didn’t get hired for a year.

BROWN: Was that incredibly disappointing?
O’HARE: It was terrifying. I think it was 1987—something like that—or ‘86, and I thought when you go equity and you’re gonna get paid, you’ll finally be able to make a living. But it was not to be so. I always bartended and waited tables so I ended up not doing theater for about a year because nobody would hire me. It’s a weird thing about when you move in to a new circle, no matter what that circle is [tea kettle whistles]—hold on, my tea kettle is boiling [laughs]—you move in to new circle and suddenly, when you’re not being paid, everyone wants to hire you because they’re like, “Oh cute! A great kid we can hire for nothing!” But when you’re asking for money they go, “Well, why should I hire you versus the other person who has an acting track record and who’s asking for money?” So that’s kind of a normal trajectory for people, I think, you move into the next niche up, you get kind of disappointed. I know that for me—for movies and TV, I’m sort of in a weird place because I’m well enough known now that I’m thought of in the same breadth of people like Stanley Tucci and David Morse and Chris Meloni. But then when you’re looking at paper, you’re going “Well, I could have Stanley Tucci. Why would I hire Denis O’Hare? I could have Chris Meloni.” So, it’s hard when you’re in competition with those great guys.

BROWN: So, what do you like most about playing Russell?
O’HARE: You know what, I love the culture of True Blood; I love the family of actors. People always say, “Oh, it’s a great group,” but it really is a great group, and anybody who’s ever worked on True Blood kind of comes away ruined because it is one of the better sets in the world, meaning, it’s very, very chill. It’s very friendly. It’s very professional without being uptight, so people don’t mess around—they actually do their job well. And the material, while from the outside it may look camp and fun, we take it really seriously. So when you have a scene where you’re threatening somebody else with their life, you’ve got to bring the stakes, pardon the pun. I love the job for that. And in the meantime, you get to do fantastic things. An episode that’s already aired for me is an episode where I got to kill Chris Meloni. That’s fun. I also get great writing. The writers really seem to respond to certain characters, like Pam—they seem to love writing for her, and Lafayette, they seem to love writing for him. The writers just love writing for Russell, and it’s a gift.

BROWN: When did you find out that you were going get to kill Chris Meloni?
O’HARE: It wasn’t for a while. I wasn’t told that up front. I knew he was on the show and I was excited. I assumed, I guess like everybody else, that he was going [to be on for] the run of the season because he’s a big actor, and a great actor. When I actually had the episode [script], at the end of the episode it showed me stabbing him, I was like “What?” I thought, “Wait a minute. There’s no way he’s dead. So how can he survive this? When a vampire gets staked, they’re dead, right?” I didn’t get the next episode, so I was like “Is he dead?” I went to one of the writers and was like, “So, wait a minute. Is Roman dead?” and they went, “Dude, he’s dead, you staked him,” and I was like, “Oh. Wow. That’s crazy!”

BROWN: How closely do you work with the writers?
O’HARE: There’s no collaboration, if that’s what you mean, meaning, they don’t ask us for input and we don’t give input. On a line-by-line basis, you may have an objection or suggestion. I personally never do that. But they work as a group really tightly, and they work with Alan Ball and Gregg Fienberg, the executive producer, really tightly. So there’s a real family of writers who work on everything. One writer will end up being credited for an episode, but that episode has been bettered by everybody in the writing room. It’s their baby, but it’s been heavily contributed to by everybody else. I think that’s how it works. I’ve never been in the writing room. I would be terrified to walk in that room.

BROWN: So if you asked them “What happens to Russell in two episodes?,” would they tell you?
O’HARE: It depends on the writer and it depends where you are, when you are. If it’s late at night and they’re tired and they’ve maybe had a drink. There are other cast members who are really, really good at wheedling out information, so I usually go to them first. I’ll sidle up and I’ll say, “So, now, what happens to me at the end of the season? Anybody talk to you about that?” And I’ll get a sidelong glance and we’ll go to the Craft service table and I’ll get the [story].

BROWN: Whom do you think that Sookie should end up with?
O’HARE: You know, it’s tough. Obviously, I’m still a Bill fan just because I feel that that’s the most natural relationship for them. He seems like a marrying type. Eric obviously is never gonna settle down. Joe [Manganiello, who plays Alcide], while he’s amazing eye-candy and has this fun esprit de corps, just seems a little unstable. So, I’m a Bill fan. What can I say? That was the most romantic pairing for me.

I wasn’t going to do [Into the Woods]. I was gonna try to make sure I hang out with my husband and kid all summer. But Into the Woods is about kids. It’s about what we give our children, and I found the material so seductive and so beautiful that, the more I listened to it, looked at it, I got sucked in and I ultimately couldn’t say no. It’s one of the great honors of being a theater artist, or any kind of artist, is that you finally end up going with your heart and not your head. You do things because you have to, and this is one of those things that I have to do.

To read the entire interview go to: interviewmagazine.com