In a recent trip to New Zealand with his play “An Iliad” Denis O’Hare was interviewed by lumiere.net.nz  about his one man play and his latest projects such as his role  in the award winning film, Dallas Buyer’s Club. 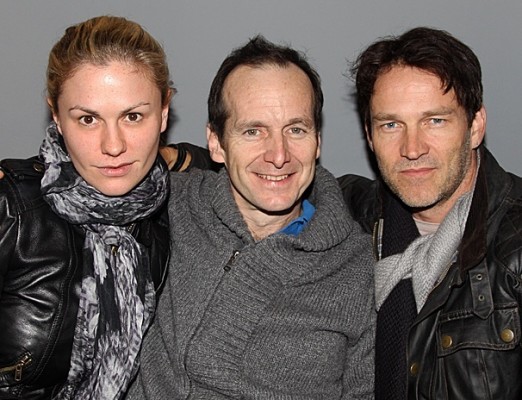 Back in October, when Stephen Moyer attended the premiere of CASM’s film, Free Ride at the HIFF (Hamptons International Film Festival), he reported about the other projects that his production company, CASM is working on. One he mentioned, was a film CASM was going to produce for Denis O’Hare, from the script Denis wrote about his sister’s suicide. During this interviewer, Denis was also asked about other work and he spoke about the project Stephen had mentioned at HIFF saying that right now they are, “working on a deal.”

AB: I’m interested in your own projects as a writer. You mentioned you approached Hoffman about one?

DO: It’s a movie I’m making with Anna Paquin and Stephen Moyer, who have a production company. I met them on True Blood. I wrote a movie about my sister’s suicide. It’s a weird road movie where my family and I had to go and figure out why she killed herself. We had to collect her life, pack up her life from this rental apartment she had in Missouri. Anna and Stephen loved the script and so we’re working out a deal right now where Stephen would direct. I would be in it. I wanted Philip for one of the parts. I think I’ll try to go to Paul Giamatti who’s a friend of mine and who I love and think is a great actor. We hope to make it next year. We’re just trying to figure out financing; who’s going to make it and all that. It’s a double whammy. I get to make a film I want to make, and I get to work with my friends who I love, Stephen and Anna.

As he explains, the company is still seeking funding for the project, so there isn’t yet any indication about it’s future yet, but stay tuned because we’ll be sure to post more information here as we learn more.