HBO’s The Normal Heart” tells the story of the onset of the HIV-AIDS crisis in New York City in the early 1980’s which takes an unflinching look at the nation’s sexual politics as gay activists and their allies in the medical community fought to expose the truth about the burgeoning epidemic to a city and nation in denial. 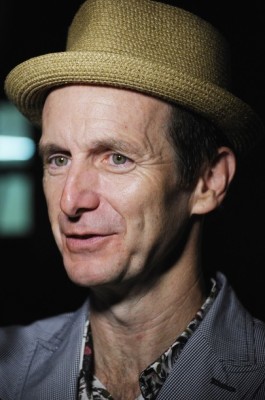 At the premiere in New York, the stars of the film spoke about their experience.  Below is the portion of the interview with True Blood’s Denis O’Hare.

Q: Can you tell us about the first time you read the script?
O’Hare: Well I did the play when I was 25 and I was drunk so I didn’t remember anything. It’s true actually. Ned Weeks, I did it in Hawaii and I remember the reaction was, “He’s so angry! Why was he yelling all the time?!” Cause that’s the part! That’s the play. It’s a really daunting play because it is so in-your-face. There’s no let up. And Ned Weeks as a character is hard to get your grip around because…of course he’s human and of course he’s sympathetic but he’s also a lot of vinegar. And it’s not till the end where you watch him break down and you get to break down with him.

Q: How did you unwind at the end of the day?
O’Hare: I drank! I’m sober now thank God.

Q: That seems to be a common thing amongst your co-workers. Were you guys drinking together?
O’Hare: No, I stopped drinking 25 years ago. So I didn’t do it then. I ride my bike everywhere so I rode to the set and I rode back home. I live in Brooklyn. They were shooting in Fire Island actually at one point so I was out there with my husband and my boy and we went down to the beach to watch them working and actually hung out and had lunch together. It was fantastic.

Q: What do you hope people take away from this film?
O’Hare: I think that they understand that AIDS is not done. It’s not solved. It’s a killer, it’s still a fatal disease. My boyfriend died of it in 2000 long after there was a cocktail. That safe sex still matters. But also that activism is the only way you’re going to get people to change. Especially people in government. They’re not going to change because they should or because you have a right to something. You have to demand your rights.

Q: How was it for you being on the other side?
O’Hare: I seem to always do that. I was a baddie in “Milk,” I was a baddie in “Dallas Buyers Club,” I always seem to be on the wrong side of it. But you know what? I try to bring a humanity to these characters and I try to show that they have a point of view. Even in this, this guy’s got a point of view. He’s saying this is political reality, watch it. Slow down, don’t make enemies. And maybe Larry Kramer would have had a different road if he had done it differently. I don’t know, there’s no way to tell.

Q: Can you talk about working with Ryan?
O’Hare: I love him. I wish he directed more “American Horror Stories.” We miss him.

Q: Speaking of “American Horror Story” are you a freak collector in the upcoming season?
O’Hare: I think. I don’t know, you know. He told me very, very little so I’m guessing at what I am. I just know that I’m in it and I can’t wait. He’s fantastic, he knows exactly what he wants and he tells you it in a short hand and just tells me to go for it. Like in this he just kind of goes, “Go for it.” Just like, “Bam bam bam bam. Go at each other.” And you just go and you do it.

To read this entire interview go to: thesource.com