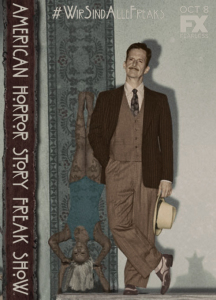 The new season of American Horror Story has begun and True Blood’s wonderful Denis O’Hare (True Blood’s Russell Edgington) is in the cast again this year.  However, this year his character is even more different than the ones he has played in the past.

Read the excerpt from Insidetv.EW.com

And Emma Roberts and Denis O’Hare show up next week as Maggie and Stanley, respectively. What can you say about them?
They’re con artists. At the time in American culture, there was a whole fascination with freak ephemera and medical oddities and one could get a huge amount of money for that. That’s all I’ll say about their story. They’re both introduced and Emma is amazing and Denis is always great. Denis really loves his part because he plays a guy with a 13-inch penis and that’s all I’m going to say about that. So Denis has never been happier!

I was going to say you had him as a severely burned man in season one and a mute, doll-loving butler in the third so he needs a quirk this year.
Well he’s a con man with a freakish gift of his own.

Will we see this thing?
Oh I’ll never tell. I will say that we did push the broadcast standards with that. But I was happy to give America that gift. [Laughs]