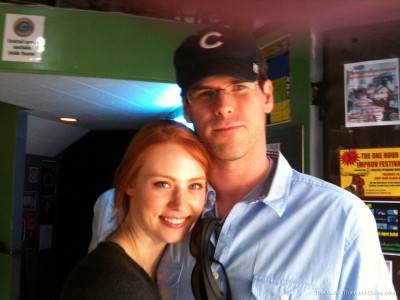 As we reported last week, iO West is a comedy theatre in Hollywood that opened its doors twelve years ago. The home theatre in Chicago has been active for over 30 years and has launched the careers of well known actors like Chris Farley, Tina Fey, Andy Richter and Mike Myers.

E.J. Scott, boyfriend of True Blood actress Deborah Ann Woll, is a former student of iO West until he moved to Chicago where he continues his performance at iO Chicago.  On Saturday, June 12, EJ received the Chris Farley Award from the hands of Deborah Ann, following in the footsteps of former recipients Pat Finn and Andy Richter.

The Chris Farley Award is named after former iO West performer Chris Farley who passed away in 1997. After his death it was discovered that Farley was involved in several charities, he did a lot of volunteer work at different Catholic charities that even his close friend James Grace, Artistic Director of the iO West Theater, knew nothing about. He didn’t do it for publicity, but because he was a devout catholic and felt it was his duty to give back. The Award named after Farley was created three years ago to honor his memory and his charity work. Each year it is given to a person in comedy that does outstanding charity work. According to Grace it is a perfect fit for EJ because he works so tirelessly for Choroideremia, the eye disease that is affecting his sight.

At the event were many very funny improv artists and Chris Farley’s brothers attended. It is great to see the award that has been set up in his memory.

I was privileged to attend this special event during the festival on June 12, when I met with the couple and asked them a few questions about the award itself and also about EJ’s own ailment, Choroideremia and his association with the Choroideremia Research Foundation (CRF), for which he works tirelessly.

What does it mean for you to receive this award EJ?
EJ: It means a lot for lots of different reasons, but mainly because of the work I’ve done for the Choroideremia Foundation which has basically occupied my life for the last 7 years, so it means a lot.

How special is it that you will receive the Chris Farley award tonight from Deborah?
EJ: Ehhh [laughs], no it’s a hugely special. She is very special to be doing it for me? I appreciate it.

Deborah, are you proud to be giving the award to EJ?
Deborah: Nah, [laughs and looks at EJ] Absolutely, I’m proud. I’ve never really seen anyone who has such hope and is such an inspiring advocate for something like this, particularly one who is afflicted with it himself. You see a lot of parents or family members or friends who do that but to have someone who is so strong and is also fighting for himself as well as others it is really amazing.

What does it mean to you that True Blood Fans have stood up and supported the CRF?
Deborah: It’s shocking. I never thought in a million years that is what might come out of this, but it is one of the most touching and life changing things that has happened since I’ve started working on the show.
EJ: It’s always impressive to me when somebody cares enough or gives enough. My friend Johnny, his little girl who is like five or something just gave me $9 or $8 from her piggy bank as a donation and it trying to get some more. It’s awesome.

What are you both doing on premiere night?
Ej: I’m teaching a workshop until 8 on Sunday and she’s already seen the first episode twice.
Deborah: We’re just going to hang out, eat dinner and watch the show, be home bodies.

After the interview, the improv show began. At the beginning, Deborah presented the Chris Farley award to EJ in a very emotional and touching presentation. 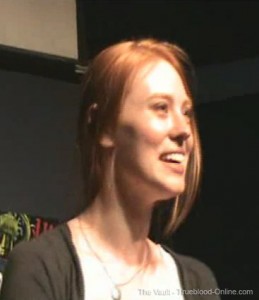 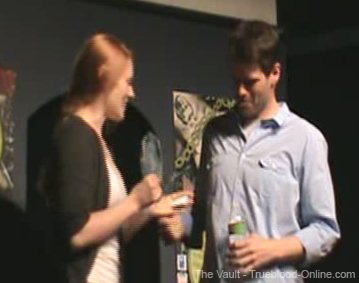 EJ Accepting the award from Deborah 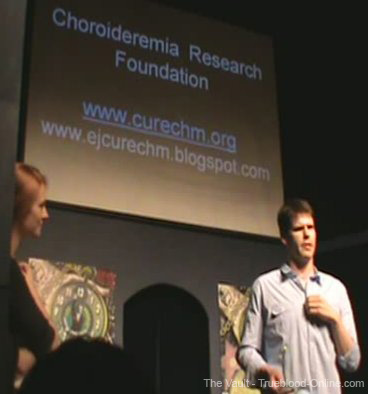 Press pause or slide it back and let the entire video load before viewing. 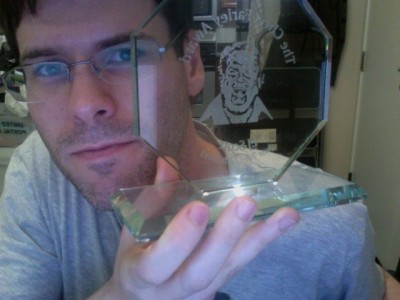 I wish to personally congratulate EJ on his award and thank him and Deborah for the opportunity to meet. As a couple, they are quite beautiful and touching, and their fondness for each other is very evident.

Deborah is an extremely nice and lovely person, and I was so happy, while also feeling extremely privileged, to have time to sit and chat with her before the interview while EJ was preparing for the show.

Then, the improv cast began to perform and the cast this night included not only Deborah but also two other True Blood cast members, Jim Parrack and Michael McMillian. I had the opportunity to interview them also and you can read about it here.

EJ is quite a funny and creative guy and I enjoyed seeing his improvisations on stage. From this performance I would have never guessed that he too suffers from Choroideremia and is slowly losing his sight. Please help to keep people like EJ seeing what we all can see by clicking on the link below to support the Choroideremia Foundation (CRF). 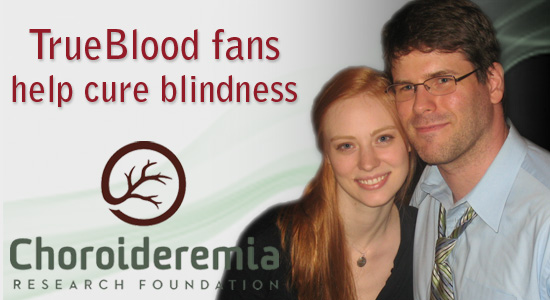 Help EJ make his goal of raising $100,000 this year by clicking on the link: : http://ejcurechm.blogspot.com/ Donations are tax deductible for US residents.