EJ Scott is in Las Vegas right now getting ready for his very last marathon of the year. This will be his 12th marathon in 2012 and he will have ran over 312 miles and raised, at this moment, over $90,000 for his charity Choroideremia.

He dropped by the Sands Expo and Convention Center in Las Vegas on Friday and picked up his race number like anybody else, but probably be the only one running the Rock ‘n’ Roll Las Vegas Marathon blindfolded.

“It can really test a person,” Scott said. “It can test a family. Find out what you’re made of. I’m stronger than I thought I was.“

Scott weaved through the crowd at the convention center with the help of a cane and squinted to find his race number.

“I’m slowly going blind as time goes along,” he said. “So I use the cane to help me not bump into things as much and keep safe.”

He has run one marathon a month to raise money to fight the disease that afflicts him and many members of his family.

He said the thought of helping them is what drives him to leg out all those miles.

When Scott crosses the finish line Sunday he’ll have logged over 312 miles and raised over $90,000 for his cause.

“It’s going to be great,” he said. “I’ve imagined it, but I can’t really grasp what it will be like finally finishing.”

Please help EJ make his goal for 2012 by considering bidding on the three ebay items we have up for auction on EBay. We are auctioning off an Entertainment Weekly and 2 gorgeous photos signed by Deborah, all items come with a True Blood wardrobe poster with reprinted autographs of Deborah and True Blood’s Costume Designer Audrey Fisher.

Place your bid on eBay: http://bit.ly/S57ehV 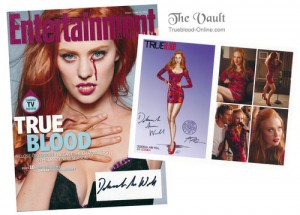 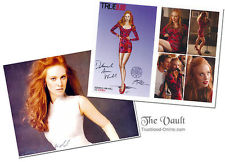 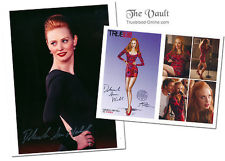 For more information about the CRF visit curechm.org or EJ’s website ejscott.com.

You can support the fight for sight with a donation.

The Vault has joined E.J.’s team in support of his goal to run 12 marathons in 12 different states of the USA in 2012. You can make credit card donations securely through our action page: http://www.crowdrise.com. All the money raised will count for E.J.’s grand total and your comment will also appear on E.J.’s Crowdrise page. Donations are tax deductible for US residents.

You can also donate directly and safely to the Choroideremia Research Foundation by credit card or Paypal using the PayPal button here below. Donations are tax deductible for US residents.