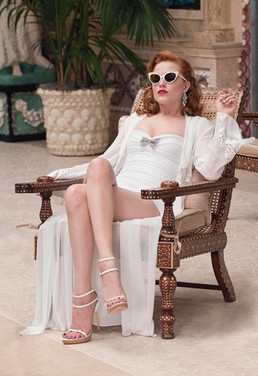 The 70′s classic Sci-fi movie Westworld will now be made into a television series by HBO and True Blood’s Queen Sophie Anne, Evan Rachel Wood has been cast as Dolores Abernathy, a farm girl in the Westworld park.

She’s a Westworld Park android that doesn’t know that her existence is just part of the park’s programing. Her character will most likely also be a love interest for James Marsden (Cyclops from the X-Men movies). He’s currently rumored to be in talks for a leading role.

The show really has drawn some big stars with both Evan and Anthony Hopkins. Hopkins will be playing Dr. Robert Ford, the man in charge of Delos.

The project, inspired by Michael Crichton’s 1973 sci-fi movie set at an amusement park, hails from from J.J. Abrams‘ Bad Robot, Person Of Interest creator Jonathan Nolan, writer Lisa Joy Nolan, producer Jerry Weintraub and Warner Bros TV. It landed at HBO a year ago with one of the Westworld biggest commitments ever for the premium network, a pilot production commitment, and now has been officially green-lighted to pilot with Hopkins and Wood on board. Described as a dark odyssey about the dawn of artificial consciousness and the future of sin, the series will keep the setting of the movie, which starred Yul Brynner, Richard Benjamin and James Brolin and introduced new digital visual techniques.

The show really has drawn some big stars with both Evan and Anthony Hopkins. Hopkins will be playing Dr. Robert Ford, the man in charge of Delos.