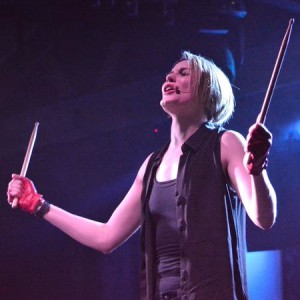 True Blood’s Queen Sophie Anne, Evan Rachel Wood will join the cast of the upcoming “For The Record: Dear John Hughes,” a theatrical concert centered on the soundtracks of director Hughes’ movies.

Wood will step in for Rumer Willis, who will now only perform for one week (March 5-8) with the touring show. They both play the role — the state of being? — of “Basket Case.”

Willis is departing early to begin filming the 20th season of ABC’s “Dancing With The Stars.” The full cast of that reality show was also announced this morning.

In addition to her stint on True Blood Wood has been recognized in recent years for her turns in gritty onscreen dramas like “The Wrestler” and the HBO mini-series “Mildred Pierce.” She’s previously tackled musical drama in the Beatles-cover film “Across The Universe” and performed with “Dear John Hughes” earlier this year during the show’s Los Angeles run.

Wood performs March 12-15 with “For The Record: Dear John Hughes,” which begins performances at the Broadway Playhouse, 175 E. Chestnut St., Chicago on March 5.

Tickets are now on sale.