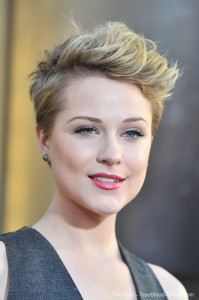 When MTV News caught up with Evan recently they asked her a “True Blood” question, “Have the fans really seen the last of Sophie-Anne?”

“There’s always a chance on that show,” she said. “[The showrunners] have not given me the final, like, ‘You’re gone,’ so I don’t know. I don’t know,” she added, which in my opinion, is a very good sign that we might see her again via flashback or something supernatural-y. “I had so much fun on that show,” she said. “[Sophie-Anne] was hilarious to play. It’s super-fun.”

Evan went on to say that although she definitely remains a fan of the hit HBO show, but she hasn’t had time to catch up on all the drama going down in Bon Temps. “I haven’t turned on my TV in a really long time,” she said. “I’ve been working, so I’m not caught up on the show and people keep giving stuff away, and I keep getting upset.”

Let us know your opinions about the possible return of the Queen.  What would Bill do if she came back?  Will it be in a flashback?