Exclusive: Allan Hyde: ‘It was fun meeting the Truebies at EyeCon’

The EyeCon event last month in Orlando, Florida was Allan Hyde’s first mass encounter with the True Blood fans. The 19 year old Danish actor who portrayed Godric in the second season and who will be back in the third season, tells The Vault how he experienced that weekend.

“EyeCon was indeed my first convention ever and also my first real feeling of how big the fan base is. I had of course experienced the occasional hold up on the street and random sweet comments but nothing this intense. It was mind-blowing. I really had fun but wow it wore me out. Slept like a baby all the way back to Denmark.” 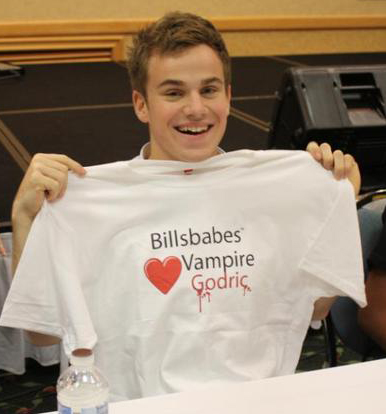 Not having experienced anything like this before Allan really didn’t know what to expect of the convention. “My mind was all set on going back home to Denmark after a good 4 months out here”, says Allan. “So this was kind of just “a something I needed to do before I could do my family-thing”. It ended up being a great experience in itself. I got to live the “celebrity-life” for a weekend and then hide away after. It was fun. Don’t know whether I would want to live that permanently though…”

“The atmosphere was really cozy”, Allan continues about the weekend in the Florida hotel. “ I believe it was a smaller convention and the fact that it was only for True Blood made it more intimate. It was the same crowd you met every day and got a feeling of knowing people throughout the weekend.”

“People were so great”, he adds. “Some were thankful for what Godric brought to the show and nonchalant, others were shy and intimidated by me talking to them and others were so excited to see “Godric” that they shed a tear. It was unbelievably awesome!”

Did you enjoy answering the fans’ questions in the Q&A?
“The Q&A was fun. I finally got to tell my story from my POV to some people who wanted to hear about it. Of course my family and friends really want to know about it but they don’t know how big True Blood is and so forth – this was fun talking to people on the same page as me. I must admit I was a little nervous to begin with as I’m sure the audience could feel. But as time went by I loosened up and got comfortable. I might have been over sharing at points – but whatever… ;)”

At the autograph signing session the fans didn’t bring him anything weird so sign. “Not like Nelsan [Ellis] who got his face tattooed onto this guy’s calf. ;)”. 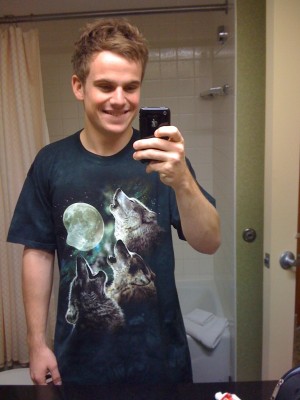 Allan posted a photo on his twitter account where he is wearing a wolf shirt he received from a fan. He plays a vampire… so where does this fascination for wolves come from?

“I received 3 wolf shirts, and they have been all over the internet after that”, Allan explains. “It’s become a much bigger deal than meant for. It was merely an inside joke between a friend and I. We were at a flea-market but didn’t really need anything so we decided to look for this really specific item of clothing – the wolf shirt – as an excuse to be there. We never found it but made it into an obsession of ours to find one. I twittered about it not knowing anyone would pay special attention to it and suddenly at the EyeCon I got bombarded with wolf shirts. It’s awesome – but I really had a hard time fitting them into my luggage on my way back. Glad I did though – they are a rarity in Denmark.”

One last question for you, Allan. The fans were exhausted after this weekend, how about you?
“I was a zombie!”