In Part 1 of the interview we spoke about the gripping story of concussion brain injuries in America’s National Football League. Stephen reveals which part he plays in the film, whether he is a football fan and what touched him most about this story.

Good news for the fans of the bearded Stephen Moyer: it is not coming off yet! Stephen will go back to Pittsburgh in the beginning and again in the middle of December to finish shooting his scenes in the football drama written and directed by Peter Landesman.

“It’s a tiny part”, Stephen says during our Skype interview from the privacy of his home. “My very dear friend Peter Landesman asked me to do it and the script is extraordinary, absolutely unbelievable. I am playing this real life pathologist who has a big, chunky beard”, Stephen smiles while scratching his facial hair.

“I am playing this guy Ron Hamilton [Dr Ronald Hamilton] who was Bennet Omalu’s [played by Will Smith] teacher at the University of Pittsburgh.” Stephen takes a sip of his coffee while I tell him that I have seen the Frontline documentary about the whole concussion issue in football.

“Unbelievable right? And the NFL is still denying it,” Stephen reacts. After seeing the documentary I am convinced that the NFL doesn’t want to admit that football can cause permanent brain damage because the sport is a billion dollar business. “Exactly“, Stephen confirms. “We talk about that in the film. It’s all about money.” 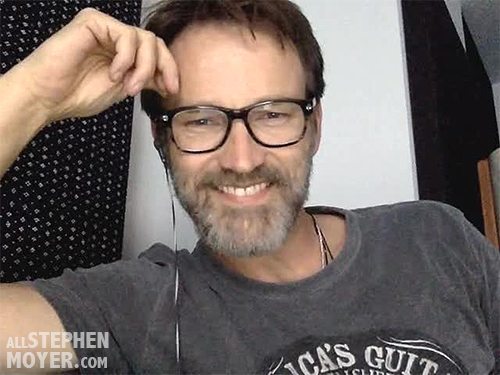 We all know that Stephen is a huge soccer fan, but what about football (or American football as it is referred to in Europe)?

“I like watching it, but it doesn’t really engage me in the same way. If I’ve missed a game I don’t want to sever an arm, but if I miss a soccer game I feel like my blood’s run out. If you actually spend a bit of time checking it out football is an amazing game, but I just didn’t grow up with it and it’s not in my bones, you know.”

Being European myself I can confirm that we grow up with our football. “The real football”, Stephen adds with a smile. And before we know it we are talking about our national teams that haven’t been doing very well lately. The team from my native The Netherlands finally managed to break a long losing streak the other day. “What’s going on?” Stephen proclaims with raised voice. “After a great World Cup they are falling to pieces.” Hell if I know, so back to the concussion film.

I ask Stephen what touched him the most about this story.

“Peter [Landesman] sends me everything that he writes and this was something that touched me because what’s interesting about it is that it’s right at the heart of American society, like soccer would do for us. Basically it’s like being told that people wouldn’t be allowed to play soccer anymore and that’s why the NFL are so vehemently trying to deny that this could be a possibility. It’s like literally saying that soccer is going to have to stop.”

Overall it’s not just the story of those individuals who have been affected by this disease, but also it’s the story of America.

“As you can see in the Frontline documentary there were players who were injured and ended up shooting themselves in the heart in order to preserve their brains so that Bennet Omalu could examine their brains. It is just unbelievable, but overall it’s not just the story of those individuals who have been affected by this disease, but also it’s the story of America.

Peter used to be a journalist and as his writing gets more brilliant and multi-layered it becomes sparer and sparer and there is less detail. The less he says, the more you see as a reader. He offered me a couple of parts asking me which one I wanted and I ended up taking one of the smallest parts because I was interested in the big scene I get to do with Will [Smith].”

As of today the film is still listed as Untitled NFL Concussion Drama. According to Stephen Peter Landesman is still trying to find the right fit and would probably want to see the completed film before he properly names it.

Watch the Frontline documentary that we discussed in the interview.