Tara Buck is Ginger, the fangbanging waitress of Fangtasia who has been glamoured one too many times by her vampire employers. Tara previously made guest appearances on popular shows as Bones, Cold Case, The Closer, Nip/Tuck, Strong Medicine, The Shield, JAG, Without A Trace, The Division and the X Files.

The Vault chatted with Tara about her role as Ginger, the staking of Long Shadow and her upcoming projects. 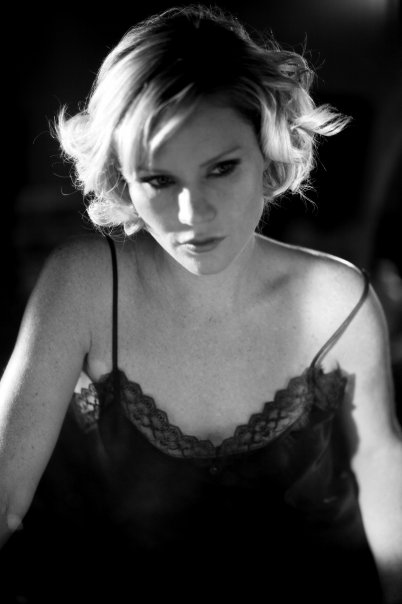 The Vault: When you first read the script of True Blood, did you like it immediately? Could you ever have anticipated that the show would be so successful?

Tara: Yes, I really liked the script when I first read it. I immediately loved that it takes place in Louisiana. There is such a realness about southern living and yet its about vampires, dark magic and what ever the twisted imagination can conceive. Plus, Alan Ball is a genius when it comes to dark humor. The script to me at first read was like a pot of spicy back porch Jambalaya!  It has a lot of things that I love about being an actress thrown into one pot. I always try to go into a new show with no expectations.  You never know what is going to do well.  My job is to interpret the part I’m playing and to give it everything I’ve got.  I had no idea the show would catch fire like it has , but it’s wonderful isn’t it?

The Vault: You are in some pretty intense scenes in the first season. The staking of Longshadow at Fangtasia was a very bloody and gruesome event. What can you tell us about filming that scene, how long did it take to shoot? And what was it like to crawl around in that puddle of blood?

Tara: Yes, we filmed all day!  As I recall it was about a 15+ hour day. It was filmed at Alex’s Bar in Long Beach.
It was a very complex scene.  There were 6 characters in the scene, special effects, tons of blood, stunts and who can forget the back to back vomiting sequences!  Exhausting, exhilarating?  Yes.  But it was so much fun!
It was amazing that when I wasn’t on camera I got to watch amazing and talented actors doing some really technical work that in the final product looks flawless, easy and spontaneous.

It was disgusting crawling around in a pool of blood.  No acting needed! I got spattered with a glob of vampire goo that hit me in the eye, which you really can see in the tape underneath my right eye.
That was the last shot of the day and I felt pretty gross.  I love when you find your self in the middle of a scene and something happens and you have no choice but to experience the moment.  It’s probably not the last time I’ll have to get down and dirty.  Ginger doesn’t have a very glamorous life.
–

The staking of Long Shadow

–
The Vault: When did you know you wanted to pursue a career in acting?  What was your first acting experience? Who were your role models, which actresses did you admire growing up?

Tara: My first dream as a little girl was to become a ballerina.  Typical, I know.  Next a circus performer.  I had a well rehearsed acrobatic routine that I wanted to perform on horse back.  I got good at the headstand but had a very difficult time staying on the horse.  Then I saw “Back to the Future” with Michael J. Fox and I fell in love.  I was ten years old at the time and shifting my life goals to an acting career seemed like the next logical step.

I was in a children’s mime troupe in elementary school and we came to LA to meet and perform with Marcel Marceau (the legendary mime expert)!  It was a big moment for me.  Yes, I’m a nerd!  That same trip we saw Lily Tomlin’s, “Search for Signs of Intelligent Life in the Universe”.  Talk about a Chameleon!  She is brilliant!  I’ll never forget how I felt after seeing her in that show. She was really the first actress who got under my skin.  I’m still blown away when I think of the range of characters she created for that show.

The Vault: You are a true chameleon. I watched video’s and photos of you from different characters you portrayed and you look so different every time. How do you prepare for a role?

Tara: Good question and a hard one to answer.
Every time is different.  Sometimes the writer captures something that you just can’t miss.  It just jumps out at you.  Other times it’s a little harder.  Sometimes I see a random person on the street and I can’t stop staring.  I look for those people when I’m creating a character.  I also love a good costume. The wardrobe people on True Blood rock!  I get the right skirt on and I’m golden.

The Vault: You will be back in the second Season of True Blood. In how many episodes can we expect to see you?

Tara: Well, I’ve noticed some sites already list cast members for early episodes in season 2 so I think it’s safe to say that Ginger is around for at least two episodes early on and from there fans will just have to watch and see…

The Vault: The fans are very excited about the upcoming season. In the first season we saw you mopping up a disintegrated vampire from the floor, what can we expect from the sophomore season, could it possibly be even wilder and stranger?

Tara: Last season Ginger really had a traumatic couple of days so she probably deserves a break.  However the life of a fangbanger is often fraught with darkness, a little dysfunction and hopefully lots and lots of blood.  Normalcy is never on the menu and season 2 will not disappoint!

The Vault: Besides True Blood, what are you working on at the moment. Are there any TV/film or stage projects in the pipeline for you? Another HBO production perhaps?

Tara: I’m working on a play at the moment called “THE GODDESS”.  It’s a fantastic piece written by Carlyle King and directed by Lillian Groag.  I also start work on an independent film called The Grind in two weeks.
Yes, I have another project that I completed for HBO called “ONE PERCENT”.  Alan Taylor is the director (Sopranos) and it was written by Michael Tolkin.  I unfortunately do not have an air date yet.  I’ll keep you posted though because I’m very proud of the piece.

I just booked the lead in the West Coast Premier of a new play called “TEN CENT NIGHT”.  A dark comedy.  The playwright is Marisa Wegrzyn.  She is a fantastic young playwright from the Steppenwolf Theatre Company in Chicago.  I am thrilled about the project and believe that the play is a very special one.  We start rehearsals this week and will open the play June 19. The week that TRUE BLOOD comes back on the air.

We open to previews June 11,12,13, 14. Dress Rehearsal is June 18. We open to critics on June 19th.  The show will run Thursday, Friday, Saturday and Sunday through August.  Call the theatre for curtain times.