The Paley Center hosted a Vampire Weekend in New York City on Saturday, November 14, 2009. LISMlvr and ONLYBILL were happy to attend on behalf of The Vault and the BillsBabes. The following is the account of their visit:

It was very dark, dreary, and stormy as we boarded the train to New York City to attend the Vampire Weekend/Takedown at the Paley Center. The first room we entered was the Steven Spielberg gallery where scenes from True Blood and Twilight were displayed along with four television sets airing Ausiello’s interview with Sam, Nelsan, and Rutina. There was a 12:00 p.m. showing of interviews from Paleyfest ’09 with the writers and casts of Angel and True Blood. Since LISM and I do not watch Angel, we took our seats at the end of the Angel showing. The room was pretty crowded considering the eroding weather conditions outside. When the Angel showing ended, there was an electric charge to the room, as everyone waited while the True Blood showing started.

First off, we must state that we are BillsBabes through and through, but we have to say that Eric (Alex Skarsgård) certainly got his share of the love in the room. Although we’ve seen the video of the Paley panel session many times, it was delightful to see it on the 8X6 foot screen. It was fun to watch and we were thrilled to see our fellow BillsBabes called upon to stand up and take a bow. We clapped for our Babes loud and clear. BillsBabe Billshuman was shown asking her question and made us BillsBabes proud. Of course, there are always a few in the midst who need to shout their displeasure of Alan Ball not following the books and not giving Eric enough air time, but the rest of the crowd was very attentive and quiet. 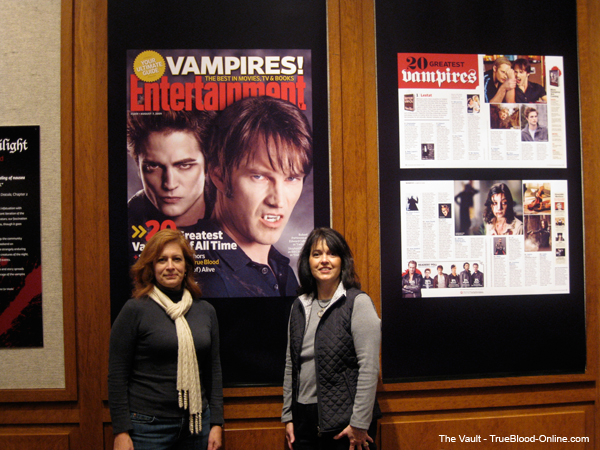 LISMlvr and ONLYBILL at the Paley Center in New York

Afterwards, we went downstairs to the “Vampire Takedown” where a panel was assembled to argue for their favorite vampire. The auditorium was broken down into various sections: “Bon Temps,” “Forks,” “Mystic Falls,” etc. The moderator was Ken Tucker from Entertainment Weekly who did a good job of keeping the pace moving. As each panelist came to the stage, they gave a brief synopsis of their vampire and then a clip was shown. The audience got quite a laugh at the campy scenes from Dark Shadows, a show that we remember watching when we came home from school. Another laugh came when a clip from Salem’s Lot was aired. There was discussion as to how today’s vampires are quite good looking (no kidding) compared to the past (Jonathan Frid was 40+ years when he played Barnabas Collins) and why we are so obsessed with Vampires today.

The panel was asked several questions, the first of which having to do with why they thought the vampire phenomena is so pervasive, a question that has been repeatedly asked of the True Blood cast. Answers included the viewing public’s interest in the romantic outcast, and that we are drawn to these creatures that find humans fascinating … we like to feel special and irresistible. There was also discussion of vampires being used as metaphors for various minorities.

The moderator asked the panel what they thought of the loosening of the old hard and fast rules of vampire lore, and the deviations we now see. For the most part, panelists enjoyed the new “innovations” such as rings and consumption of animal and synthetic blood. It was agreed that vampires are no longer unattractive and this is a result of commercialization and demographics.
The subject of women’s passive roles in these types of stories was discussed and it was agreed that that female characters, the likes of Sookie Stackhouse and Buffy the Vampire Killer have moved women away from being the fainting screaming victim we were accustomed to seeing in old Dracula movies.

Afterwards there was a trivia contest. We are ashamed to say that we were knocked out in the first round. The lucky winner went home with a Sparkly Edward Doll. We had great time at the Paley Center and received a goody bag with a DVD of the first season of True Blood, a bottle of TruBlood, a Dark Shadows calendar, and fangs! Don’t ask; the fangs are mine!