Facing The Atlantic Log Book: One week at sea

After their boat Patience had been repaired, Bertie and James started their Atlantic challenge again and left the harbor of La Gomera for the second time on Friday morning, December 9.

In a video they explain that one of the solar panels didn’t work and that’s why they decided to call the assistance vessel and be towed back to the harbor where fortunately the problem was fixed in a day.

Determined to make up for lost time the boys rowed for 14 hours straight in 2 hours shifts before taking a break, resulting in 35 nautical miles rowed in the first 24 hours of their race.

Also that day an announcement came through from ICAP, one of Facing The Atlantic’s sponsors, confirming that they will be making a truly life changing donation to Bert and James’s chosen charity Facing The World.

Sunday brought rough weather and huge waves which broke of the oars (they have spares) and it was impossible to continue rowing. Waiting for calmer waters Bertie and James spent over 14 hours in the hot, sweaty, moist cabin. With the autohelm steering them in the right direction they still managed to make many miles and reaching speeds of 11.9 knots surfing down the waves, which did result in some “bottom clashing” in the small cabin.

On Tuesday the land crew posted the following on Facebook:

They are now getting into a good routine. They are managing 45-50 nautical miles every 24 hours and are looking to up that over the coming days. They are in sight of waypoint TWO which means they will have passed 4 lines of Longitude going WEST so far. They have a total of 44 degrees of Longitude to pass between La Gomera & Barbados. This is very important to them as they use them as goal posts. They (not sure who exactly!) are doing endless amounts of maths. They are predicting a 58 day crossing at the moment (on current calculations). They now realise this is a VERY LONG journey and are starting to settle in. They are really pleased with progress considering they are 4 days behind the fleet. Love getting your messages. The support is paramount to them. THANK YOU! :o)

On Wednesday Patience overtook the Team Tiger boat and gained steadily on the next boat in the race Boogie Woogie. From the land crew we learned that our boys are now rowing naked to prevent salt rashes and nasty chaffing (video and HQ photos to follow later ;)

Solo rower Tommy had to withdraw from the race due to technical problems. The boat of Team Tom capsized on Tuesday night and sank before their eyes, after spending 10 hours on a liferaft the boys were saved by a cruise ship. They are shaken but uninjured. The team of Amigo withdrew from the race earlier this week due to extreme sea sickness of one of the member.

As of Friday morning Team Facing the Atlantic had another speedy past 24 hours with 52 nautical miles rowed and still 2183 miles to go to Barbados.

Bertie and James are in high spirits and they thank everybody for their support and messages of encouragement. 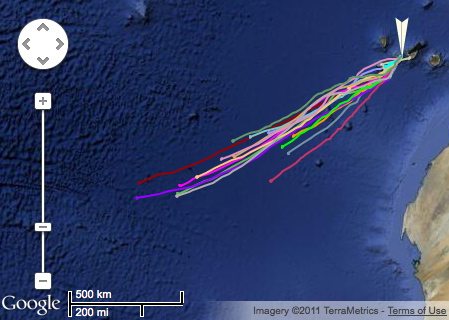 The race website posted an interesting video about how they locate the boats and we also see Bertie and James on sea, they are in the white boat, you hear James ask at the end of the video if they are doing well.

You can follow the progress and adventures of the Facing the Atlantic Team on the Talisker Wisky Atlantic Challenge website and on Facebook and Twitter where the land crew Sam and Anna will keep you updated. 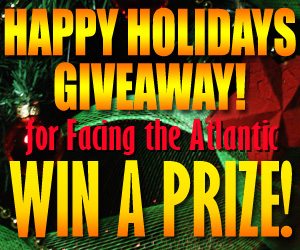 Be part of the adventure and participate in the Happy Holidays Giveaway.

Transform your Holiday presents into a donation for Facing The Atlantic and win one of the awesome prizes.