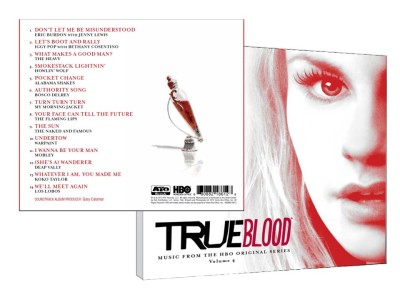 As you may know, we’re currently running a givingaway of some True Blood Original Music Volume 4 CD’s. We thought you might like to hear what the Gary Calamar thinks about his job and what its like choosing the music for the show.

Below is an excerpt of the interview Gary did with Rolling Stone Magazine about the new CD.

For the past five seasons, Gary Calamar, the disc jockey turned award-winning music supervisor has anchored the hit HBO show’s music department, recruiting an A-list set of musicians to soundtrack the twisted adventures of Sookie, Bill, Eric and the other blood-sucking inhabitants of Bon Temps.

“It is probably my most rewarding show that I work on,” says Calamar, who also serves as music supervisor on Dexter. The latest volume in the sexy vampire show’s collection of Grammy-nominated soundtracks, True Blood: Music From the HBO Original Series Volume 4, released today, features newly recorded tracks from Iggy Pop, My Morning Jacket and the Animals’ Eric Burdon, in addition to a deep cut from the Flaming Lips and a track from breaking L.A. rockers Deap Vally.

Calamar says his work on True Blood is distinct from other shows in that each episode is named after a particular song. “So when I receive the script early on, it has a title, sometimes of a song that is well-known and sometimes a song that I’ve never heard of,” he explains.

He recalls a recent instance when he received a Season Six script entitled “Don’t Let Me Be Misunderstood,” its name derived from the much-covered song recorded by Nina Simone and the Animals, among others.

“So immediately I started running with it and we eventually made a new recording with Eric Burdon and Jenny Lewis,” he says. “I put those two together, and they did an amazing version.”

Burdon was happy to take part. “The True Blood recording has a really fresh feeling to it,” he says. “It’s way different than the first recording with the Animals.”

As luck would have it, the episode’s title has been changed. “Now we’re finding a new spot for that song,” Calamar says, laughing. “It’s just the way crazy television works.“

Read the rest of this great interview by going to rollingstone.com

And, be sure to enter our giveaway which ends on Thursday, May 30 at 12 noon P.D.T.  It’s “easy peasy” to enter, just tell us why you like True Blood music.

Click on the image below to enter the giveaway.