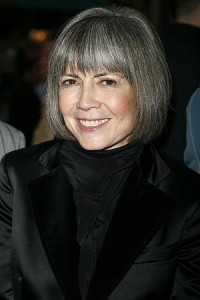 You may have heard it before: writer of Interview With The Vampire Anna Rice is a fan of True Blood. In an interview with thedailybeast.com she explains why.

Vampires have become almost like a genre, like the western. What I see happening, with writers like Charlaine Harris and Stephenie Meyer, is the domestication of the vampire. I was more interested in a powerful, old-world figure that had a lot of knowledge, experience, and was surrounded by a lot of glamour and mystery. I wanted to keep the romance. I loved the idea of these people gaining wisdom as they aged, and how that might cause them to be ever more tormented by the fact that they don’t really belong in the world and they prey on human beings, who they’ve really come to appreciate. Charlaine Harris is doing something different by imagining what it’s like if vampires are legal and you have them living in your southern town, and I think she gets a tremendous amount of energy out of that. She’s very witty—there’s a lot of satire there—and on the HBO show, True Blood, there’s even a romance with Vampire Bill.

It’s a given! The vampire is an outsider. He’s the perfect metaphor for those things. He’s someone who looks human and sounds human, but is not human, so he’s always on the margins. When I write and assume the point of view of the vampire, I understand the agony of being a public outcast—someone who doesn’t belong anywhere, yet longs to be part of something and gravitates to other outcasts of his own kind.

Back to True Blood, how do you feel about the show’s depiction of vampires as these uninhibited, primal, sexual beings?

I’m a fan of the show. I see it as a logical part of it all. [Harris] has expanded the sexuality that’s inherent in that idea. I didn’t think of that, but as my books went on, I involved my vampires in more sexuality. But I couldn’t go as far as Charlaine Harris did, because I had said that my vampires can’t have sex; that the act of drinking blood is orgasmic for them. She’s doing it a different way. She’s saying that this blood drinker must also be dynamite in bed. Makes sense!

I think True Blood does werewolves justice with Alcide.

Oh, yeah I like Alcide. I like that actor [Joe Manganiello] a lot and I think the character’s hot.