US and UK fans can now re-watch seasons of True Blood in great new ways. Check out these new possibilities for viewing below:

In the UK you can get True Blood via Google Play

TV shows by American broadcaster and production company HBO, including Game of Thrones, True Blood and Boardwalk Empire, are now available to purchase from the Google Play store in the UK. HBO is now going straight to customers in the UK, rather than distributing its content through Sky or Netflix, as it has often done in the past.

Both US and UK fans can take advantage of this option. If you have Google’s Chromecast, you can view HBOGO on your TV with the device.  With Chromecast, you can easily enjoy your favorite online entertainment on your HDTV—movies, TV shows, music, and more from Netflix, YouTube, HBO GO, Hulu Plus, Google Play Movies and Music, and Chrome. No more huddling around small screens and tiny speakers. Chromecast automatically updates to work with a growing number of apps and it just plugs into your TV. Get started in 3 easy steps: plug Chromecast into any HDTV, connect it to WiFi, then send videos and more from your smartphone, tablet or laptop to your TV with the press of a button. 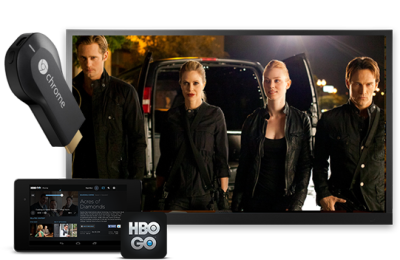