One by one we put the prizes in our Happy Holidays Giveaway in the spotlight. You can win these prizes by participating in our charity giveaway for Facing The Atlantic/Facing The World. Read all the details here.

Giveaway Prize: a signed copy of “Sunlight and Shadows” by Abri van Straten and “Imperceptible Shift in the Light” by The Lemmings. 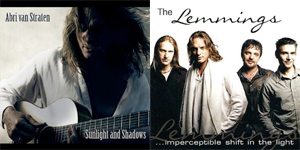 South Africa born musician Abri van Straten is the lead singer, song writer and guitarist for the South African rock group, The Lemmings. Their 2009 album “Imperceptible Shift in the Light” holds 11 beautiful melodic songs and is the very CD that put True Blood actress Kristin Bauer on Abri’s tracks. Sometimes stalking does pay off: Kristin and Abri wed in 2009.

Now based in Los Angeles Abri released his first solo album last year. “Sunlight and Shadows” continues in the style of The Lemmings with Abri’s beautiful, husky voice and classical guitar style.