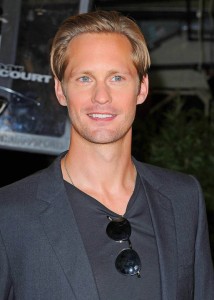 HBO has interviewed Alexander Skarsgård about his role of Eric and the Eric and Sookie pairing in Season 4 of True Blood.

Below is a part of that interview:

HBO – Fans have been dying for Eric and Sookie to hook up – what kinds of reactions have you been hearing now that it’s finally happened?

Alexander Skarsgård -I know that people have been talking about it – but I try to stay away from the blogs and fan sites. I’m a little scared … I do meet fans in person, though, and the feedback has been great this year. It seems that people are enjoying Eric’s arc, which is great because I had a blast shooting it. I love playing “Amnesia Eric.” It’s just such a different side of him, and it’s always fun as actor to dig deeper. You learn a lot, and I definitely have this year.

HBO – Is it difficult to play a person-within-a-person?
Alexander Skarsgård– I wanted to make sure that it was a side of Eric – not a new character. The side of him that was hidden. He’s very innocent and naïve now, but I also thought it was very important not to lose the old Eric – the predator – and the element of danger there. You’ve got to feel that to make it interesting, I think, and it’s something I focused on. You definitely see how he can get very violent, especially in those moments where he’s protective of Sookie.

HBO – In this week’s episode, “Cold Grey Light of Dawn,” there’s a drawn-out, multi-location love scene between Sookie and Eric. Was that the most involved one you’ve shot so far?

Alexander Skarsgård- It’s up there. I’ve done some stuff in other movies as well that’s pretty graphic … But these were definitely some pretty intense scenes. We were kind of all over the place. But my favorite scene is yet to come …

To read the rest of this interview, go to hbo.com/true-blood