How Joe Manganiello got his monster physique 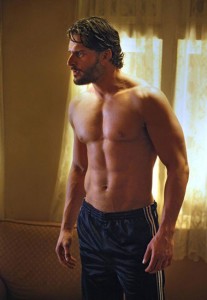 In the interview below, we find out how the former star athlete, True Blood’s Joe Manganiello built his monster physique and fulfilled a childhood dream.

Before the Carnegie Mellon School of Drama acting gods and Hollywood producer-writer-director Alan Ball came calling, Joe Manganiello aspired to be a naturally lean and ripped athlete. Little did the 6’5” varsity basketball, football and volleyball letterman know as a steroid-snubbing teen that his acting dream job would be the motivation for him to develop the cut, carnivorous body he always wanted.

As the HBO vampire-centric hit’s resident werewolf Alcide Herveaux — the benevolent half-man, half-monster assigned to protect star Anna Paquin’s Sookie Stackhouse — Manganiello channels his athletic past to unleash his inner animal. He achieves this through a beast of a cardio- and protein-intensive regimen he calls the “Werewolf Workout.” The six-day-a-week, twice-a-day fitness routine is the brainchild of celebrity trainer Ron Matthews, who sculpted Hugh Jackman’s physique for the “X-Men” star’s role as Wolverine.

For Manganiello, who credits his family’s Pittsburgh blue-collar background for his work ethic, it’s all part of the job. And as HBO’s new beefcake werewolf, the actor exercises another tried-and-“True Blood” maxim: You are what — or as remains to be seen with Alcide — whom you eat.

Muscle & Body: You’ve said you prayed as a kid to become a werewolf. Is Michael J. Fox to blame?
Joe Manganiello: [Laughs] Partially. I was a huge fan of “Teen Wolf.” But I was really more of a fan as a little kid of the black-and-white monster movies — the Bella Lugosi, Boris Karloff, Lon Chaney Jr. stuff. Halloween was always my favorite holiday. I had monster figures. I drew monsters all the time. I read all of the Stephen King books to the point that my father started taking the books from me. I attended a Catholic elementary school. I went to church every morning at 6 a.m. praying that God would turn me into a werewolf. I’d heard as a little kid that if you pray hard enough and your faith is pure, God will answer you. But after a few weeks of praying with all of my heart, it wasn’t happening. So I started thinking there wasn’t a God, it’s all a big gyp.

M&B: So now your faith has been restored?
JM: Yeah. I jokingly tell Alan Ball, “You’ve brought me back to Jesus.”

M&B: You’ve said that the role helps you unleash the beast within.
JM: That’s what is so interesting to me about werewolves in the pantheon of monsters. Growing up as a naturally big kid, you’re taught to be responsible, not lash out, not use your size. I think there’s a definite parallel between that and Alcide. Being a werewolf, there’s a real sense of catharsis letting that beast out.

To read the rest of this interview, go to Muscle and Body Magazine