Once Upon a Time will feature True Blood’s Kristin Bauer van Straten when she reprises her role of “Maleficent” in Sunday night’s episode (Dec. 14). She will be part of a trio of evil familiar faces who will make their debut in Sunday’s winter finale. Entertainment Weekly has exclusive photos.

Below are photos showing Kristin in her new costume and head dress as Maleficent with her fellow evil ladies Ursula (Merrin Dungey) and Cruella de Vil (Victoria Smurfit), otherwise known as the Queens of Darkness. 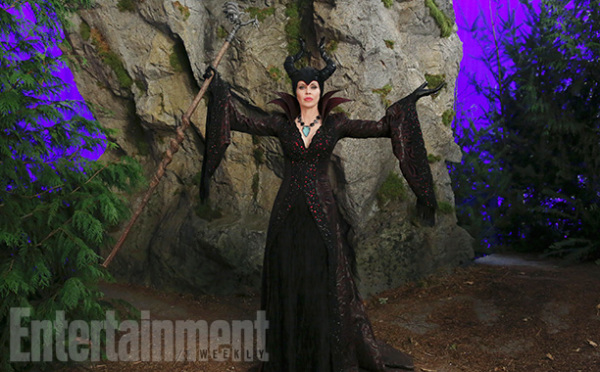 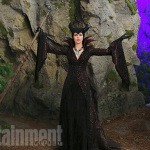 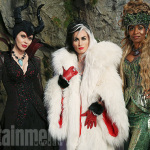 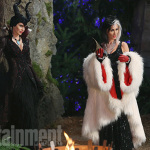 Below is part of the interview about how were these three characters were chosen to join the residents of Storybrooke? Executive producers Adam Horowitz and Edward Kitsis walk us through the process and tease the new foes:

EW: How do you choose the next character you’re going to use?

ADAM HOROWITZ: Well, we have a giant dartboard. No. We have a lot of characters that we want to explore and have been on our wish list ever since the first couple of episodes in season 1. As we developed each season, we looked at who fits into our world, who fits into our mythology, how can we continue to build that out and what characters are the most fun to do that.
EDWARD KITSIS: For this one, we saw in the first half of the season that Regina (Lana Parrilla) was really questioning whether or not villains could get happy endings. So we knew we wanted the second half to be villains in search of their happy endings. We always wanted to bring Maleficent back. We thought, “What is the greatest team of evil we could gather to go up against?” Ursula we teased in the Ariel (Joanna Garcia Swisher) episode last year, and then Cruella, for a while, we just always wanted to bring her on the show and couldn’t figure out how because in the movie, she was kind of ’50s. You always want to put your twist on it. For us, Cruella just fit into this trio of terror.

Maleficent’s new costume appears to be very similar to the one Angelina Jolie wears in the film that came out this summer, in which Maleficent isn’t necessarily evil. Is the costume change a hint?

KITSIS: It’s [costume designer] Eduardo [Castro] getting creative. [He] loves to change the costumes. If you notice, sometimes Lana will have 20 changes in an episode for no reason other than we can.
HOROWITZ: To be completely honest, Maleficent appeared in the second episode of the show. Now, everyone–the writers and costume designers—have had more time to really develop the character on a character level, a visual level and special effects level.
KITSIS: I would say she’ll probably have a few more dresses before we’re done.
HOROWITZ: As far as the movie Maleficent goes, we were big fans of that movie, but we’re not doing that movie. We’re doing our spin on Maleficent. There may be nods to that movie and the classic Maleficent story—
KITSIS: Definitely nods to the classic. As Adam said, we introduced her in episode 2, so we had already been thinking about her on our own. So like Frozen, we’d stick more towards the movie. This is a case where this half of the season is going to be much more of the Once twist on all of them.
HOROWITZ: One of the things we established very early on with Maleficent in season 2 was that she and Regina had a relationship, so that’s a thread we intend to explore.