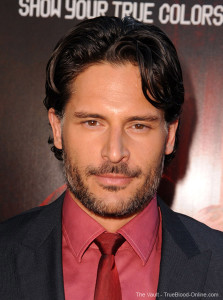 While True Blood’s Joe Manganiello was disappointed that he didn’t get to play the role of Superman in director Zack Snyder’s franchise reboot, (the role went to British actor Henry Cavill), he is consoled by the fact that he expects “big stuff” to happen for Alcide in True Blood’s Season 5.

Joe told Digital Spy that a schedule conflict with his HBO show True Blood took him out of the running to play Clark Kent.

“[Warner Bros] wanted me to screen test and part of the screen test process is that they actually have to settle your deal, as if you were cast going into a screen before you get the screen test,” he said.

“And so that involved settling of shooting schedule and the dates for shooting Superman would have conflicted with 11 weeks of season five [of True Blood]. And as it turns out they had big plans for my character in season five and they were not willing to share me with Superman.

Discussing how he felt after losing out on the Superman part, Manganiello added: “This was back in January. I’d be lying if I said that I wasn’t… I was really, severely depressed for a few months. For a few months afterwards.

“Because I really thought the direction they were taking the movie and the character, I really thought I had a great idea where to take that and I was very excited and I just wanted to try out my ideas and things. But, you know, it just wasn’t meant to be.”

The 34-year-old admitted that he was consoled by the fact that “big stuff” will happen for his character Alcide Herveaux in True Blood.

“Playing Alcide is a bit like playing a superhero. He has this secret identity that he has to hide from the world and has these superpowers and is burdened by that,” he commented. “I love the show and I love this character, I love working with my castmates and I’ll forever be indebted to [True Blood executive producer] Alan Ball for the opportunity. So there’s a definite upside.”