When, True Blood’s Kristin Bauer van Straten reprises her role of Maleficent in the TV show, “Once Upon a Time” next month, it’s reported that she is going to look even more wicked than she did the last time.

“One of the things I was sorry… I didn’t do [with] Maleficent was a much more elaborate headpiece,” Emmy-nominated costume designer Eduardo Castro said during a recent visit to Once’s Vancouver set. “Now, the new headpiece will be more like the cartoon (seem at left). And I think it’s going to be quite spectacular.”

Below is a photo of Kristin dressed as Maleficent in the headpiece used during the 2011-2012 season of Once Upon A Time.

We’re looking forward to seeing Kristin’s new look when she appears in the episode titled, “Heroes and Villains” on December 14. 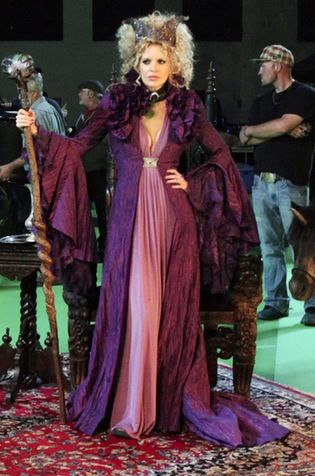