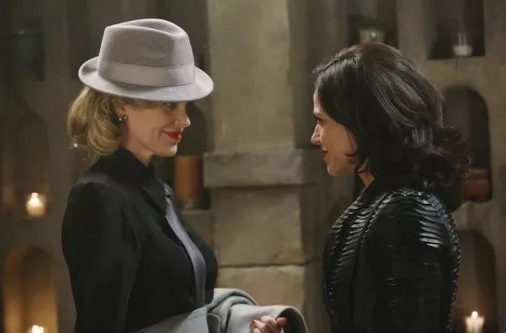 With her schedule cleared up following the end of True Blood, Kristin Bauer van Straten is now into her part of Maleficent on “Once Upon A Time. Kristin talked to TV Fanatic about her new role, but in a portion of the interview she was asked about True Blood’s “Pam” and if it was a challenge for her not to be “campy.”

Read that portion of the interview below:

KB: Oh man, is that the question I ask every single day, every single scene, and I am looking to Lana and Bobby [Carlysle] like, ‘okay. You guys know this world. I’m kind of new here’ so, I trusted them. I checked in with them. The directors, the producers, the writers. They all have my back and I realized as I think I got more comfortable and settled into Maleficent, I realized that there’s such a scaffold of support that one doesn’t have to overly work to sell these characters.

We have these amazing sets whether its green [screen] and it will be put in later or we’re actually in one of the really cool sets that they’ve built. You’ve got this unbelievable costume, hair and makeup. I’m with these other actors who are so proficient and live and breathe these characters now. We’ve got the writing and the producers write, right there, at arm’s length if you have a question. So, I started to relax into less effort pretty quickly, and the amazing thing about all of those people that I just mentioned is, there was such a feeling of support. This doesn’t always happen. We had it in True Blood and you have it here.

To read the entire interview with Kristin go to: tvfanatic.com
Tagged