I had the pleasure of meeting Mark Hartzell last summer when I visited the set of True Blood.

Mark has worked on True Blood as an assistant to editor Andy Keir in Season Two, and has worked his way through the ranks, learning from all along the way. As the show airs its 7th and final season, Hartzell is proud to wear the title of “Editor.”  I love, love, love seeing how films and TV shows are made; just love it “behind the scenes,” so it was great to meet Mark when he was at work. The friend with me during the set visit, who is also a video editor, would have loved to sit with me for hours and watch transform the raw footage, but unfortunately we could only spend a few minutes seeing where he worked and meeting him. He kindly showed us the scene he was working on which was a scene with Alexander Skarsgård handing from wires.  Mark was busily removing the wires so it appeared Alex was suspended in space. When I saw the final scene when the episode aired, I was amazed! 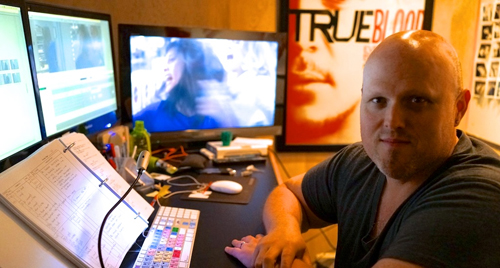 Mark is featured on Randi Altman’s Post Perspective in an article which we reprint some of here:

Looking back at when he started on the show, Harztell remembers Keir teaching him about pace and visual effects. And this “higher education” of sorts continued. For Seasons Three, Four and Five he assisted Michael Ruscio, ACE. “Michael is a master of performance and pattern. He can make less talented actors appear more talented and good actors look great, both in the cutting room and on set. When I’m in a bind I always ask myself “WWRD: what would Ruscio do.”

When Ruscio went on to direct four episodes of Season Four, Hartzell was given the opportunity to co-edit two of them. “Luckily, the same thing happened in Season 5, with two co-edits and one solo episode,” he explains. “In Season 6, I was offered the editor position when the amazing Lynne Willingham went off to cut Showtime’s Ray Donovan. So I’ve gotten to edit or co-edit 11 episodes in four seasons. It’s been amazing.”

We threw some questions at Hartzell — whose assistant is Emily Streetz — just as he locked his final episode on the show.

You’ve been on True Blood since 2009. How has the post workflow changed over the years?
When I started we were editing SD and capturing from DVCAM offline. We went tapeless and HD Season 4. For the final season the big difference was we stopped shooting film and went digital (using the Arri Alexa). We are using DNxHD 36 for post workflow.

What do you edit on, and is that the system you started on?
I am mostly an Avid Media Composer editor. My first editing experience was actually on an upright Moviola doing the Gunsmoke Project at Loyola Marymount University in an editing class. That was crazy because other schools were going straight to Avid back then, but they still had the equipment to sync real film and sound, and to cut film. In hindsight it was amazing that I got to touch real film. I did some tape-to-tape nonlinear editing there as well. Then I learned how to use the Media Composer. I also know Final Cut Pro 7 and have dabbled in Adobe Premiere Pro.

How do you work with the producers on the show? Who do you work with most in terms of feedback?
After the director’s cut, the show goes to the producers and the writers. Then we have the EP/showrunner Brian Buckner along with EP Gregg Fienberg giving notes or coming to the cutting room, along with the writer/producer that wrote the episode. So generally I have two or three producers in the room. It’s very collaborative.

You’ve worked on other television shows, such as Smallville and Deadwood, over the years. Is there anything about True Blood that stands out from the others?
True Blood stands out because it is many things. It’s drama, action, horror and comedy all wrapped up in one. That’s unusual because most shows tend to be more compartmentalized. It’s a lot of work to get all the film cut by the time the editor’s cut is due because sometimes we have huge dialog scenes and then a huge action sequence, or a very VFX heavy sequence too. The experience has been a gift: I get to edit amazing actors acting and rip peoples heads off.

How has the role of editor changed since you began your career? Are you now being asked to do more than just edit?
Our ability to temp in VFX and do a more complete sound mix has increased somewhat since I started. I think that’s sort of standard across the board. I’m thinking back to my first experience as a union assistant, which was on the Dark Angel pilot for James Cameron. There were far fewer VFX on that sci-fi show and a less complex temp mix than almost any episode of True Blood. It’s escalated, which is good, but it’s more work.

What’s your next project?
I will be editing Season 2 of the hit ABC drama Resurrection.

Get on over to Twitter and see what was said in tonight’s 6pm post chat with Mark @tweetermf and #PostChat’s Jesse Averna @Dr0id who moderated the chat.  And be sure to check out Post Perspective’s site.