The L.A. Marathon started yesterday just after 7 a.m. under cold and cloudy skies even though it was expected to be a day of torrential downpours.

Rain was an issue for many runners during last year’s marathon, when 2.36 inches fell. This time the forecasts were wrong and as the sun came out, about 23,000 runners were scheduled to take part in the 26.2-mile race from downtown Los Angeles to Santa Monica. 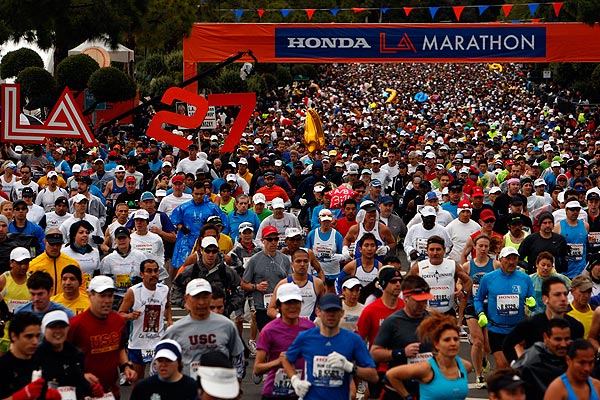 PHOTOS: 2012 L.A. Marathon is off and running and somewhere in this crowd is EJ Scott

I had set up a meeting with EJ and Deborah Ann to be at the finish line of the run to catch a short video with them about his run. I had signed up to receive text alerts about EJ and my last text report about his run read: Edward Scott – Finish in 6:13:12 Pace 14:14 At 13:59:04.  So, he finished at approximately 2:00pm and it hadn’t rained at all and instead the big weather story of the day was that the winds were very strong.

EJ posted the photo below on his Facebook page saying: “A highlight of my life was randomly meeting Chef Gordon Ramsay before the start of the LA Marathon yesterday. Shortly after this pic was taken I met Sean Astin (no pic) but he was super nice and said nice things to me and wished me luck. It was a great start to an excruciating 6 hours and 13 min. I completely nerded out meeting Gordon. He was really very nice.” 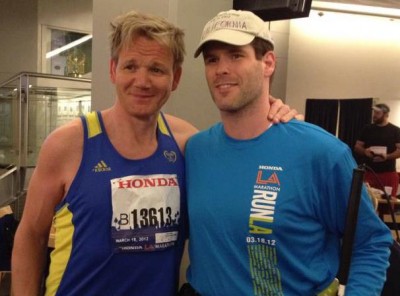 At the finish line we met up after EJ had finished his third of twelve marathons that he plans to run this year. He looked relieved to be done and with him was his girlfriend, True Blood’s baby vamp, Deborah Ann Woll. It was here that they met with me for a short video interview. As you will hear him say in the video below, he dressed preparing for rain and the change in the weather was a surprise that sort of put him, and many others, off a bit. 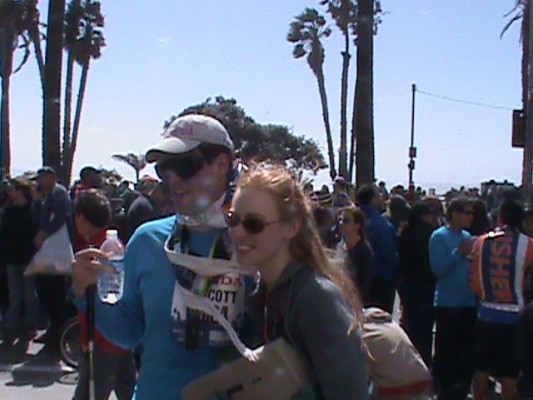 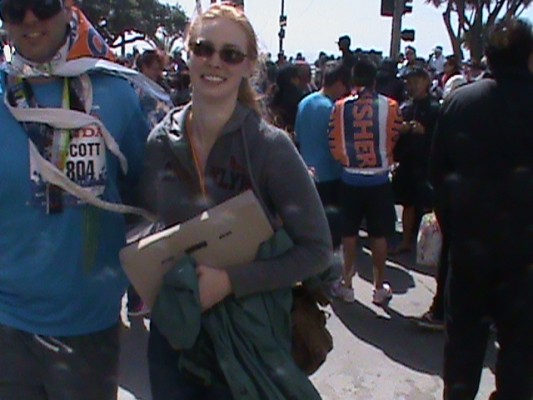 I was happy to be surprised that the race had another True Blood connection. EJ ran the event with True Blood’s Executive Producer and Writer, Raelle Tucker’s husband as his guide. I was thrilled to get a chance to meet Raelle; I am a huge fan of her writing.  For me the day was complete.

After we talked, Deborah was kind enough to sign a photo of Jessica for a friend and she also signed TV Baby’s “Baby Vamp” outfit, see photo below.  Doesn’t she look adorable in her shades with her baby vamp “onesie.” By the way  TV Baby’s mom, TV Girl was also with us and she helped me get this photo. The “onesie” is available in the The Vault’s Zazzle Store. 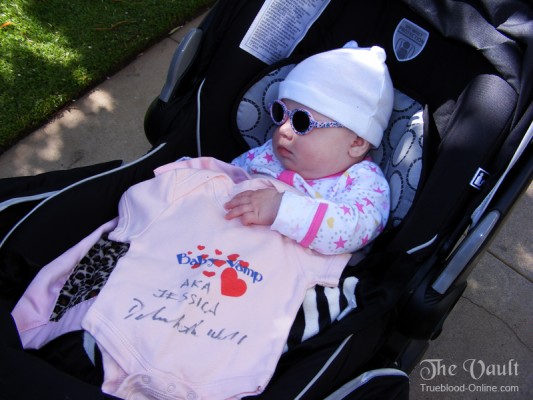 Also, EJ did a video about his experience which you can see here:

Ultimately, the day was about helping EJ and his charity. Choroideremia is a rare inherited disorder that causes progressive loss of vision and leads to total blindness. At this time, there is no treatment or cure for this disease.

There is only one thing standing in the way of finding a cure for Choroideremia: money, or better the lack of it, so EJ has set his mind on raising funds for the Choroideremia Research Foundation with an extraordinary athletic endeavor by running 12 marathons in 12 states in 2012. To protect his eyes from the damaging sun he is running the marathons blindfolded with the aid of a guide. He hopes to raise $12,000 per marathon.

The Vault has joined E.J.’s team in support of his goal to run 12 marathons in 12 different states of the USA in 2012. You can make credit card donations securely through our action page, so we can all keep track of how much the readers of The Vault have contributed: http://www.crowdrise.com. All the money raised will count for E.J.’s grand total and your comment will also appear on E.J.’s Crowdrise page. Donations are tax deductible for US residents.

This PayPal button was provided to the Vault by Cory MacDonald, Operations Manager of the Choroideremia Research Foundation.